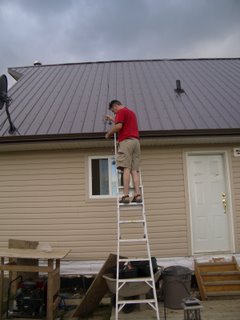 Union Guy found an antenna for the cell phones, and brought it out today. It significantly improves the reception on the phone, which is a good thing.

After seeing the picture, he suggested this post be titled "Who's the goof on the roof?"

The siding is all done now, and looks really good. The siding guys found a wasp or bee nest up in the peak of the house and had to go on a field trip to buy insectiside spray so they could finish! They're all done now, and we have eavestroughing, soffit, and all the siding. It will be wonderful not to hear they Tyvek flapping in the wind anymore. 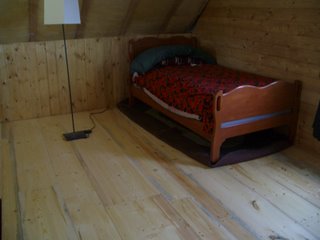 My task for today was installing flooring in the loft. It is actually much easier to install than I expected it to be: there are several steps to the process, but none of them are actually difficult. For those of you just tuning in, I'm using wide planks from Whiskey Flats Lumber rather than the more common varieties of hardwood flooring. I love the old fashioned look of the variable width boards and the visible screws (which look like nails unless you check closely). The floor is one of my designated luxuries, although in reality it won't cost me very much more than prefinished hardwood from the local Home Depot (this stuff is costing me about $6.50 a square foot).

To install this kind of flooring, you have to measure and mark the places to put the screws, then drill the holes over the marks, get the board into position and put the screws in. A carpenter's square, a pencil, two drills and a bag of screws and you're good to go. The worst part is digging through the pile of lumber in the living room to find the boards I need! I think I moved every board today in search of the ones I needed. However, I am very happy with the end (well, interim) result - check out the picture in full size. 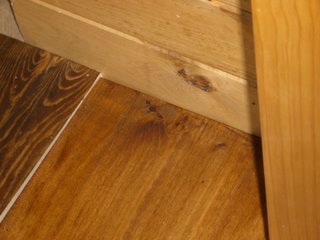 Once the floor is down and sanded, it'll be stained with black walnut stain. This picture shows three of the four wood finishes that are in use in the house: the light walnut on the walls, the golden pine on the doors, and the black walnut on the floors. (Those are just a couple of pieces of scrap flooring, stained with two coats of Watco Black Walnut and pushed up against a wall so I could see what it looked like). It is actually a bit darker than what you see in the picture, the flash washed it out a little. I like the contrast: I purposely wanted a very dark floor, medium walls, and a light ceiling. I think having the colours move from dark to light makes the room feel more 'grounded' somehow.