Today, I realized something.

I went out to the barn, cleared out Sasha’s stall, and got everything ready – she will calve soon, and I am really looking forward to milking. Weird, eh? I love my cow so much. I don’t even get it. I feel about her the way I feel about some of my best dogs. She has a personality and we partner together in the whole milking thing, and … well, and we eat her offspring, but somehow, in the whole bigger picture, that seems awesome, not awful and yukky.

I like the sheep, I do. They are cute. Some of them are friendly, others a little more skittish. There is nothing so adorable as lambs doing the sproinging thing around the pasture in the spring.

But sheep need much tighter fences than cows. I can put Sasha on a tie out and let her graze the ditches (true, I can do that with Cherub, one of the bottle fed lambs, now a grown ewe, but not most of the sheep). We like lamb, but mostly, we prefer beef. I love fibre arts, but I am just not in love with processing raw fibre.

And most of all, my resources are extremely limited.

I can’t get around to the feedings, the shearing, the vaccinations … I can’t do it all. The Boy has, thankfully, picked up most of the slack, but really, I can’t keep up.

I can keep up with a cow, though. In fact, I think I could keep up with two cows and a calf – I would like to have two dairy cows, who take turns being the one on milking duty, so I don’t have to worry about sending one off for breeding right in the midst of milking time … and we’d have a beef animal to put in the freezer every year. Only three or four animals to deal with at any one time, just a few vaccinations, no shearing, everyone halter trained and able to be tied out to eat or moved from one place to the other.

Today, I realized that I need to find another home for the sheep flock.

There are three that will stay – Lambie, Natalie’s last lamb, who we raised on a bottle and who just gave us a pretty little black ewe lamb named Jellybean, who would also stay, and Cherub, The Boy’s 4-H bottle lamb who nudges you to pet her every time you go outside. She’s such a character. They will stay.

Everyone else, though, needs to go to another home where there is grass and fences and space (and hopefully a guardian dog), someone who will happily shear them and delight in them.

I do love them. I just don’t have what it takes to be a good shepherd – I thought I would, but with the onset of PTSD? Nope. I don’t have the energy.

So … if you know anyone who’d like a lovely flock of fibre/meat sheep, send ‘em my way. There are five ewes (three of whom are still due to lamb – so nobody is moving anywhere until that’s done, that wouldn’t be fair), two rams (one of whom is the most beautiful and even tempered Icelandic ram you can ever imagine), and one wether … plus the two lambs on the ground so far, and probably three or six more to come.

I feel … well, I’m sad, but I also feel like it’s the right choice.

I’ll miss them, definitely. But the honest truth is, I’m not well enough to do all that’s needed to care for them. We’ve managed, we’ve done okay, but they need a different home. That was all melted and starting to turn green!!!
It's snowing again!
No comments:

More Beautiful Than Before: the project is a go!

It’s official … the next book has reached the final draft and we are ready to move into production! 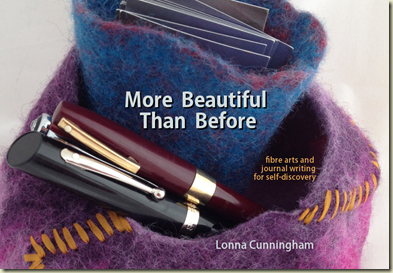 Because this book is available not just as a single, standalone book but also as part of a kit, the up front costs are a bit higher than with my previous projects, putting it a little beyond “oh, just put it on the credit card and we’ll pay it off as orders come in”.

As a result, we are using Kickstarter to accept preorders of the book (as well as other forms of sponsorship, all of which come with some kind of tangible reward, from a small download to an e-book up to and including a full kit and having your name on the acknowledgements page!).

What’s the book about? Well, here’s a look at the back cover: 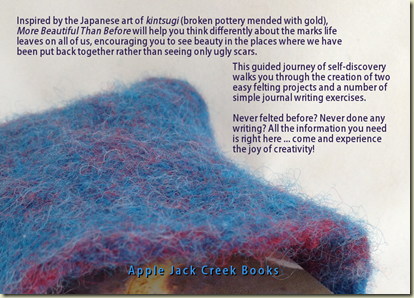 You can find out more by following the link to Kickstarter and watching the video there, there’s also a full explanation of all the various ways you can support the project (and get your copy reserved!).

If you are interested in the one-day workshop based on this book, let me know! I’ll be ready to offer those by early summer. Just leave a comment below, ping me on Ravelry, or send me an email!