Surprise Sheep for The Boy

Next year in 4H, The Boy wants to participate in the Sheep Project. He'll raise a lamb for market (or maybe a ewe, there are a few sheep options) - he has to take care of it all year, feeding it and doing all the proper sheep-care type things. We have a great sheep leader and the kids who were in the project this year really seem to have enjoyed it, and The Boy just loves sheep (as, of course, do I). So, we need to be ready for sheep come fall.

In addition, we have six acres of grass that needs someone to eat it. So, hopefully we'll have a few sheep around here to act as lawnmowers eventually. At the moment, of course, we're kind of busy building a house, and all that kind of thing. Still, before fall we need some sort of sheep shelter and a safe enclosure.

One night about a week ago, just after Union Guy located fencing for me, I was surfing the livestock listings (I do this regularly... just cause...) and what do I see but a babydoll southdown ram lamb for sale, in Rimbey (by Red Deer). He's $100. Normally these little sheep go for about $500 for an intact ram.

So what's the big deal about a babydoll southdown? They only grow to be 24" high at the shoulder full grown, so they are 'lamb sized' forever. Lots of people keep them for pets or lawnmowers, orchards like them cause they're too short to damage the vines, and well, they're cute. 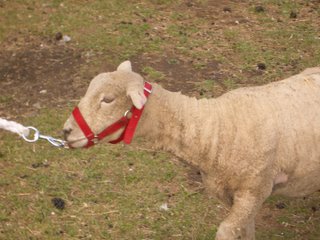 (I think that Gram is going to try and arrange a visit to this sheep farm on Texada Island this summer ... )

Anyway, The Boy saw pictures of these sheep on the web and absolutely fell in love with them. He really, really wants one of these sheep, but at the price ... well, his first 4H lamb is not gonna be a $500 sheep! He was quite disappointed by this, but accepted the financial reality and decided he'd save up for one for later.

You can imagine what happened, of course. I immediately emailed the lady about this sheep ... his name is Master Jack, of all things, of COURSE he belongs on Apple Jack Creek! I was the first to email, and she put him on hold for me. I arranged to pick him up Saturday. I hadn't told The Boy of this sheep's existence. :)

The problem is, at the time of the purchase, we had no fenced in area yet, and sheep by themselves are miserably lonesome. So, I needed a paddock, a shelter, and a buddy.

Union Guy and I worked last Sunday and fenced in an area by the chicken pen and the shed with page wire, so we have a paddock. We told The Boy it is a fence for the garden, or maybe, if we haven't got something else in place by then, his 4H sheep can live there (we finally had to say that, as we nearly blurted out something about 'sheep' several times and didn't want to risk discovery!)...

A shelter we can rig up quickly, we have enough lumber.

However, a buddy was a problem.

Monday night was the 4H livestock auction - the kids sell their market animals at this auction, so our sheep leader was there. I explained my problem and she said she'd check her flock and see if she had someone who could come live with us, she was sure she'd have a lamb or an older ewe ready to go .... whew. I'd find out on Wednesday.

Wednesday night, at our 4H meeting, one of the girls in the sheep club told us about her market lamb - her grandpa bought it at the auction and then gave it back to her, but she doesn't want to butcher it! So ... she sold it to me, quietly, out in the hall while her mom kept an eye on The Boy to make sure he wasn't coming ... still, The Boy knew NONE of this was going on. I've seen this lamb (she named it Mint Jelly but I suspect we will call it something else!) and it's so cute: it has a black face and black legs and very soft fleece. 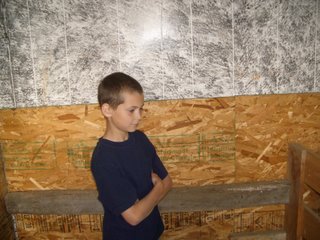 The Boy was quite stunned when I said, "This one's a minisheep, the kind you like.

I bought it for you."

He just stood there, silent ... then said "really?"

When we got the sheep loaded into the truck, I asked him, "What is the one thing that every sheep needs?" He knew the answer: "A buddy." So, I told him about the other sheep, and what the plan was.

So, we drove home and got Master Jack unloaded and into his paddock, and The Boy stayed home and cleaned out the shed while I took a load of trash to the dump and picked up Sheep #2 (it doesn't have a better name yet, and I refuse to call it Mint Jelly!). 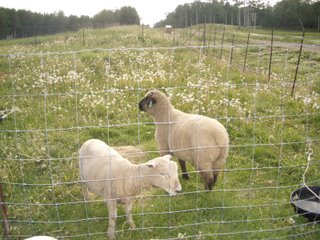 The sheep are now both in the paddock, and a quick shelter was put up against the round bale (two long boards with a piece of plywood nailed to it makes a marvellous lean-to). They've got a bucket of water and enough grass and dandelions to keep them occupied for a long time.

The Boy says that I'm a great mom, which is cool. It was fun organizing the surprise for him, and watching him enjoy the animals is all the reward I need. :)