Another week, another update!

My goodness, it's been a long time since I posted.

Well, the Cousin Neighbours departed for the Yukon last week. Union Guy and I took Monday off work and helped with the final packing and cleaning of the house: there wasn't really any other 'gift' we could give them, so we gave our time. :) 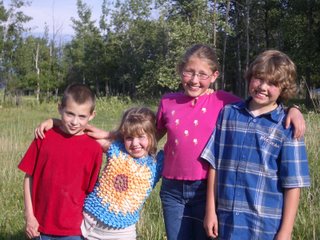 The Boy had a special gift picked out for the kids - each of them got a squishy pillow. These pillows are made of some kind of stretchy fabric, sort of like what bathing suits are made of, but silky, and filled with some sort of polystyrene beads, so they mold themselves into a very comfortable shape, and can be squashed into pretty much any small or unusual spot in a suitcase or box. Perfect thing to have in a trailer as they don't take up a lot of space! It was wonderful to have the day with them and the other friends who came to help, and to feel like we were finally able to give something back to the wonderful neighbours (and family) who have done so much for us in the past year.

After a hard day's work loading the Hillbilly Trailer (which is being stored in a friend's barn until next summer, and really did look like something the Beverly Hillbillies would have towed!) and scrubbing cupboards and walls, we had a barbecue dinner at our house. The kids got a chance to run around and play one last time, and the grownups finally had a chance to sit and relax after a busy day. When it came time for farewells, both The Boy and I managed not to cry ... but it wasn't easy!

The next few days were a bit long as we processed our loss ... we did stop by at the house and take some eggs to the new neighbours, the lady seems very nice. Of course she was up to her ears in kids and work (the guys had gone for another truck load from town) so we did not stay long. We'll make an effort to get acquainted after they've had a bit of time to catch their breath.

Around our house, the flooring was finally shipped - the guys at Whiskey Flats Lumber very graciously stored my flooring for several months past the time I'd originally expected to take delivery, and it is now stacked in a pile in the living room. It's going to be beautiful - I can't believe how wide some of the planks are! For those of you just tuning in, I splurged on antique-style variable plank width hardwood flooring. Some of the planks are 21" wide, others are 6", and there are a few different sizes in between. Installing it is going to be a bit of an adventure, but it is cut to fit my floor plan, so I have a map that tells me which planks to put down where, and each board is labelled so that I can match it up with the map.

This adventure is going to wait for a little while.

On the outdoor front, Union Guy found some fencing that was being sold at an amazingly good price, so he did the long drive out to where it was situated and brought two loads of tposts and page wire back to Apple Jack Creek. 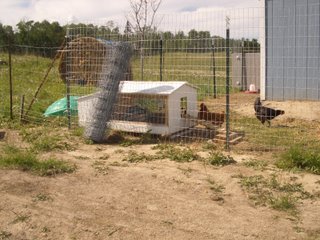 We started on the remaining permiter fence, and created a large square fenced off area which will someday be the exterior of the chicken moat and garden, or so I suspect. That was a hard day's work in the very hot sun, but it's the kind of work that feels really good because when you are finished, you stand back and say, "Well, look at that. That's what we did today!"

We moved the bunny into the chicken pen, where she has more room to run around and dirt to dig in. The chickens occasionally wander into her 'front porch', but this doesn't seem to bother her at all. They can't fit through the door into her sleeping chamber at the back, so she does have a private retreat if she needs it. The Boy and I had a bit of a panic yesterday evening when we went out to see the hole she'd been digging and then filling back in ... there was no bunny in the pen! A gap had opened at the base of the board that serves as a temporary gate, and she had just wandered out. The Boy saw her, I nabbed her, and we all breathed a sigh of relief (including, I think, the bunny). She was to be the guest of honour at the 4H meeting tonight, and it would have been horrible timing to have The Boy's rabbit project animal disappear the night before the final Achievement Day presentation ... never mind how heartbreaking it would have been to lose her! I immediately braced that temporary door much more firmly. The next day I found a pile of chain link fencing leftovers beside the dumpster at work, so I brought those home in the trunk ... I think that'll make a nice proper gate.

The other big priority in the past week was finishing up the 4H year: the kids do a record book of all the things we did during the year, and those had to be finished up and submitted for marking. The winner gets to send their book on to a regional competition, and eventually there is a "best record book in the region". There were just two kids in the Rabbits as Pets project this year, and The Boy came in second by one point. He was a little disapointed, but he took it very graciously and said that the girl who won did a great job on her book. He also says he learned a lot this year, and already has ideas for what he wants to do better next time!

Tonight was the final presentation for 4H: the kids brought their rabbits to the meeting and everyone got a chance to pet them. Each project member had also done up a PowerPoint presentation that described the things we had done and learned over the course of the year. I borrowed the projector from work, so they were able to deliver their speeches with the slides on a big screen in the meeting room just like grownups do, but way more interesting!

Today The Boy came home from school with a high fever and a nasty headache, but with the help of Advil and apple juice he did manage to patch himself together enough to give his rabbit presentation as well as a special presentation on Mason Bees (a hobby he picked up from a zoologist/itenerant pastor he met on Vancouver Island, of all things). He did a wonderful job, especially considering how horrid he was feeling, and then collapsed into his seat, shivering from fever, took another Advil on the way home, and went directly to bed. I have a fairly strong feeling I'll not be going to the office tomorrow! Thank goodness for remote access and satellite internet.

Further updates can be expected on the weekend!