The Boy spent Saturday with the Cousin Neighbour kids, who leave for the Yukon on Tuesday morning. The kids were all at a friends' farm for the day, and when I dropped off The Boy's sleepover gear, I was called to assist with a lamb emergency.
One of their sheep had given birth to twins the night before, but one of the lambs was too small and weak and hadn't been able to get up to nurse. The oldest girl found him lying there in the ditch looking nearly dead - when I arrived, they had him indoors, wrapped in a blanket, and were coaxing him to drink calf milk replacer (conveniently on hand) from a bottle. The girls really did have everything well in hand, I was most impressed. 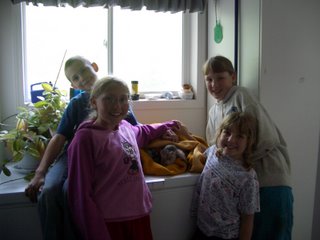 The lamb was a bit chilled, so we found some wheat bags and heated them up for him, then went out to see if we could get real momma's milk. Fortunately, his momma was friendly and cooperative, so the girls were able to milk her (all I did was hold her still!) and the lamb was ready for another bottle by the time we got back in the house. He guzzled that second bottle down and went right back to sleep. This is a picture of the Lamb Rescue Team, and SweetiePie (known generally as "Pie", since that sounds more masculine, I'm informed).

Now, with my newly acquired UFA membership, rubber boots permanently coated in muck, a flock of chickens of my own, and personal experience assisting a Lamb Rescue, I am thinking that I'm a few steps further along to officially qualifying as a Country Girl.