Most of the time these days I am focused on getting the interior of the house done. However, there are some outdoor jobs that need doing as well, and this week one of those took top priority.

I am adopting a small flock of chickens from the Cousin Neighbours (who, sadly for us, are moving to the Yukon ... although they are first taking an entire year to travel with their whole family across Canada and to Bolivia and the Honduras, which is amazingly cool). Anyway, the chickens are slated to arrive tomorrow, and their housing was not ready! The coyotes would be more than happy to have them for dinner, I am sure, so it was important to get a house built.

Remember the blue shed that we lived in when we first came to Apple Jack Creek? Well, half of this little place will now be home to the chickens, and the other half will be storage for any number of odds and ends. 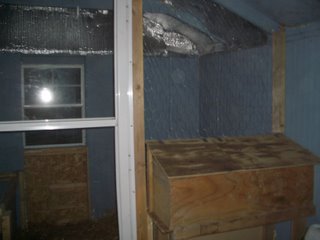 The chicken end of the shed has been walled off with chicken wire, assorted scraps of lumber, and a screen door (also a gift from Cousin Neighbour). The chicken house features a nesting box that is accessible from outside the pen (meaning the humans can go into the shed, lift the lid of the nestbox, and collect the eggs without going all the way into the chicken zone), a droppings pit (meaning that the roosts are over a 'box' that contains lots of straw and can easily be cleaned out via a trap door at one end of the box). I've insulated the walls and the ceiling: the whole shed isn't done yet, just the end by the chickens - I'll probably have to insulate the rest of it before winter, but it can wait. 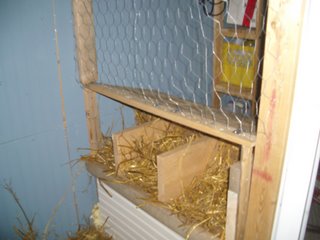 (Yes, I am aware that I needed the insulation last December when it was minus thirty and we were living in there and freezing our toes ... hey, I figure the birds might as well benefit from my lessons learned in life. Besides, I am not running the kerosene heater for them.)

Outside the shed, fence posts are in the ground to make a chicken pen, and we started attaching wire to the posts. My goodness, t-posts are wonderful inventions. They can be lifted and carried and installed by someone as small as me - with help from The Boy to keep things vertical and properly lined up. Of course, I managed to drop the heavy steel post-banger onto my kneecap and have a bit of a bruise, but hey, isn't it some sort of badge of honour to get a bruise while installing fences that will keep your poultry safe from predators?

Speaking of keeping the poultry safe, I found this idea on the web:

Basically, you put up a predator resistant fence around your garden, then six feet inside of that fence, you put up a poultry resistant fence, making a moat around your garden. The chickens get to run around inside the moat, eating bugs (which then won't eat your garden plants). Deer won't jump over two fences that close together, so your garden is safe from them. As an added bonus, hawks and eagles won't swoop down between two fences that close together for fear of getting entangled, so your chickens are protected from aerial predators as well.

This layout will actually work quite well with the way the shed and garden are situated ... well, the garden in my imagination. It won't go in until next year, I think. I can multitask, but there's a limit.

So if my chickens will eventually have the run of a Chicken Moat around my garden ... does that make the chicken coop a Chicken Castle? Maybe a Chicken Keep?

I think we need a good name for the coop. Suggestions welcome. :)