Roses for no reason make a girl smile 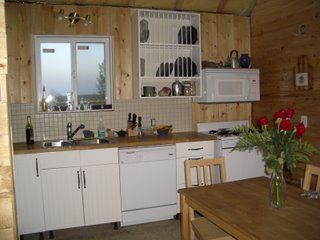 I got a half dozen roses delivered to my office today: a gift from Union Guy for no particular reason at all, other than that he loves me. How cool is that, eh?

You can see them sitting on the table in the new and improved kitchen: note that the microwave is no longer supported by a 2x4 and the stove is actually pushed back against the wall! The microwave needed a shelf above it to support it, and I managed to pick one up on the weekend. Tonight, while Union Guy fixed electrical outlets in the kitchen, I stained the shelf, drilled holes in it, and mounted it to the top of the microwave and to the wall. It's all nice and sturdy now and the air filters may actually do some good when I'm frying things on the cooktop! I did notice that the lightbulbs that shine on the stove top are 20 watts each ... two of them are in there, that's 40 watts! Extravagance! I took one out so now it's half as bad ... but most of my lights (actually, all the other lights in the house) are compact fluorescents that use no more than 13 watts. I don't think I'll be turning that one on very often. :)