Tomorrow and Friday I’ll be at an alpaca show doing a spinning demonstration, something I’ve done several times before – always a fun (if tiring) time. Some other spinner friends come too, and we get to play with lovely fibre for a couple of days and explain it to people as they come by to see the animals. It’s cool.

I wanted to take some weaving along this time, so we can make something with the yarn that is spun. We have taken a full sized Rigid Heddle loom in the past, and could have done that again, but I wanted to try out the extremely portable backstrap loom setup, just to see how it worked.

I ordered a small rigid heddle (one of the advantages of owning a fibre shop!) and did a bit of reading online … and voila, a loom: 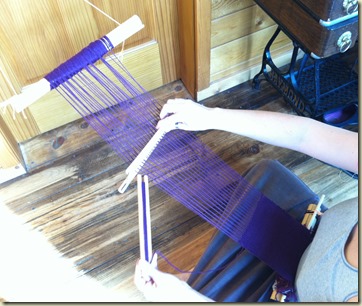 (Sorry about the sun glare.)

That’s a purchased rigid heddle, a stick shuttle I found upstairs, and two pieces of bamboo and some short dowelling. And some string. Oh, and the green piece of test-weaving I did back when I first got the loom works perfectly as the backstrap! It was way too thick and unweildy to be a scarf, though it had approximately scarf-sized-dimensions, so it is wrapped around my back and tied with loops of string to the bamboo pole closest to me.

I’ll get some more pictures of the loom in use at the alpaca show, but yep, it’s easy and affordable! The only tricky part is figuring out how to hook the loops on the wound up rods so that they don’t unwind on you, but with a bit of trial and error I got that figured out.

So, that’s where I’ll be for the next couple of days – then a workshop on the weekend, so I expect I’ll be pretty tired by the time this is all done!

Got some pictures of the loom in use at the Alpaca Show: 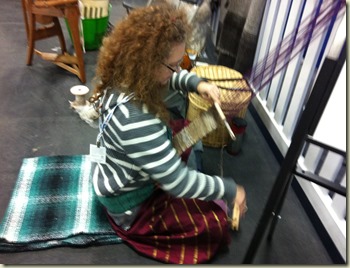 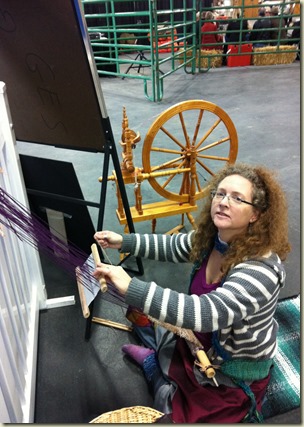 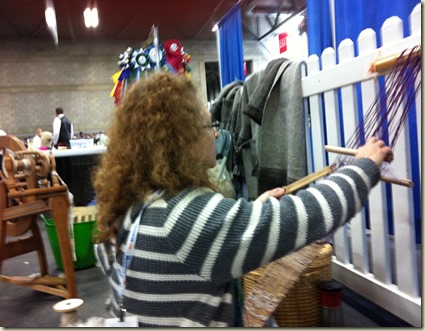