With the loss of Bob the Guardian Dog, we have a bit of a gap in our Outdoor Protective Services Department. Mackenzie can handle things on his own, I’m sure, but guardians do best in a team, and we don’t really want to get a second full time LGD just now – we have very few sheep, the chickens are penned, and the cow can pretty much take care of herself. Still, we need a guardian – and if something happens to Mackenzie, we need to have a bit of time to fill the gap and not be caught with no outside coverage.

Enter Caleb. Caleb is awfully big for an inside dog – we didn’t expect him to get quite so large (even the vet was surprised at how big he grew). He is about the size of your average Lab, with a fluffier tail (which knocks things over regularly) and all the energy of a lab and a collie. Fortunately, he is very well behaved and easy to train … but he needs a bit more time to run than he’s been getting. Caleb is going to move to being a mostly-outside dog, now, and serve as backup for Mackenzie. His body and fur are enough to handle the weather, and we won’t have him outdoors full time until summer, as he’s just not adapted for the cold yet. Still, he’s been spending more and more time outside: he likes to sit on top of the hay bales and survey the world from up there, or sit on the front deck and watch things happen, or chase the magpies or the deer when they show up. Of course he still gets lots of attention from The People and we are taking it slowly, but I think he will do okay.

This, of course, leaves us with a gap in our Indoor Protective Services Department. I can’t really relax without a dog in the house – I need someone with better hearing to let me know if someone comes down the road, and to confirm my sense that everything is safe (because the dog is just lying there, quietly, not barking or worrying). None of us are particularly comfortable without a dog inside anymore – it just seems wrong, somehow. Yes, the outside dogs will generally let us know if something is going on, but they don’t always – if it’s been a long night and they are fast asleep mid afternoon, sometimes they don’t bark at a vehicle that arrives. We need to know when that happens!

Plus, dogs are comforting. Caleb has eased my fears and sorrows many times. If he is outside more, we will need someone to fill in the gap. 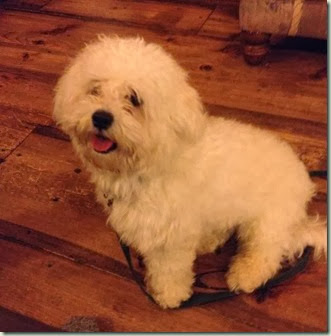 Ben was born September 2012, so he is a year and a bit … he’s a Shi Tzu Poodle cross, and he is little and cute (his head comes up to the seat of a kitchen chair, and he can curl up underneath one). He lived in a condo and barked whenever someone came to the door of the building, which was troublesome in those close quarters, but barking when people come by is a feature in our rural household! (Never mind the fact that his tiny wee little bark seems like nothing compared to the giant huge bellowing woofs we are accustomed to from the LGDs.)

Ben’s still a little shell-shocked from the change, but he is perking up quite a bit now that he’s been here for a couple of days. We picked him up Monday evening, and he was very growly and scared, though not at all aggressive … just letting everyone know he was NOT comfortable with these new people! He’d been wearing a shock collar to stop his barking, and would just bark through the pain as he really needed to let everyone know he heard someone. Unfortunately, that ongoing pain and some less-than-optimal socialization had made him a bit shy around new people. If you bark because someone is at the door, and you get zapped, and someone comes inside and you bark more and get zapped again, you are going to decide that new people bring pain. It’ll take a little while to learn that it wasn’t the new people, it was that darned collar gadget … which came off the minute he got home, and won’t ever go back on.

His barking habits and fear of new people didn’t seem like a deal-breaker to me, though: yes, he was growly and unhappy, but he wasn’t mean or aggressive. Within a few minutes of meeting him he let me touch him, roll him on his back, put my hands in his mouth, no resistance at all. We can work on his fear – goodness, if there’s anything this household understands it is living with someone who faces a lot of fear! The key with dogs like this is to just give them time to warm up and let them decide when they are ready to meet all the people, to convince them that we are the Bringers of All Good Things and to help them build their confidence so that they are more resilient to changes in the environment. We are unlikely to ever have a lot of new people traffic in our house, so if he’s always a little shy around strangers that won’t be a big problem in our world anyway. And as he’s still a ‘teenager’ in dog years, I think he can be healed of his fear without too much trouble.

So Ben joined us on Monday – he has slept quietly through the nights (an advantage of getting an older dog rather than a puppy!) and this evening, he and Caleb have been racing each other around the kitchen table, wrestling and generally creating chaos in the house as they play and act silly. It’s wonderful. Ben’s still a bit shy … he spends a lot of time hiding under the kitchen chair I’m sitting in, but he’s getting braver by the minute. Hawkbait the cat is still VERY uncertain about this new creature and hisses and snarls and tries hard to sneak past him without being noticed, Oreo is a little less upset but still keeping her distance, while Caleb is all excited that we brought him a playmate!

We expect that within the next week or so, Ben will find himself more comfortable being here and stop with the fearful growly noises – that’s perfect timing as The Reluctant Farmer comes home next Friday, and the Small People will be here then. I am confident that we can help Ben to find his inner strength and help him to see that the world is not a scary place where random zaps of electricity hit him and people are angry because he tells them when things are happening in the world. We’ll work some more on basic obedience (he knows ‘sit’, sorta, but ‘down’ and ‘stay’ and ‘come’ are long forgotten since his puppy obedience classes). We’ll help him to know what’s expected of him, tell him when he’s done a great job, correct him gently but clearly when he makes a mistake, and give him a job to do and people to love and friends to play with (oh, goodness, if he can help Caleb burn off some of that excess energy,then everyone will be happy!).

This morning, I left him behind for a few minutes while I went to do something else. When I came back, this is what greeted me:

And seeing him play with Caleb tonight eased my heart somewhat from the sorrow of missing Bob. I would rather have had things just stay as they were … but life is change, and so here we are.

Welcome to your new life, Ben. I’m sure we can find our way together.