Apparently I needed to start some new projects 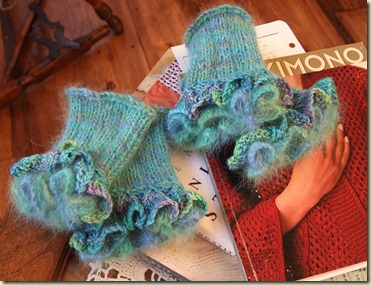 I only meant to make one pair, but see, after I finished the first pair I realized that I’d made long ruffles on one and short ruffles on the other (in fact, each glove should have one long and one short, but that’s another issue entirely). So I had to make another pair just like the first, and then switch them about so that there were two matching sets. The angora and sock yarn combo is absolutely delightful, though, I have to say. What a great pattern for a little bit of leftover luxury yarn!

Speaking of luxury yarn, this is a hat (well, it will be, it’s about half done) in a mix of angora, silk, and bamboo. Oh yeah, it’s soft. 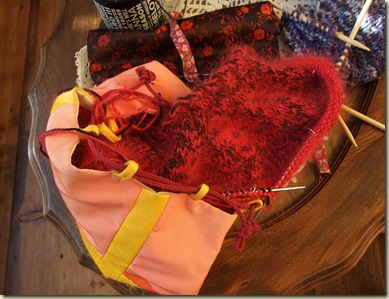 This is modified from a very old Paton’s pattern from a booklet my aunt sent to me. It didn’t need a lot of changes, just modified to work in the round instead of flat and seamed, and I’m doing some different things with the yarns involved to make some interesting patterning in the fabric.

Today, in the mood for something a little larger but still easy to work on, I have started designing a side-to-side sweater. I think I’ll call this one Lateral Thinking: 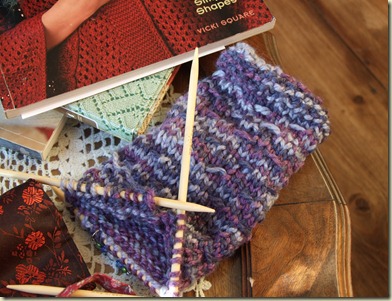 Sleeve one underway: seed stitch cuff, linen stitch knitting, side to side construction. Should be interesting to see how it turns out.

Yes, the pattern books are all there because I have been having a lot of different inspirations for knits … which means I go digging about for more inspiration, take copious (sometimes only half comprehensible) notes, and occasionally try something out. Sometimes the notes sit for a bit, and I come back to them later … sometimes the pattern ends up not working, or it morphs into something completely different than I’d originally intended.

Ah well, I need a stash of ideas for the second book, now, don’t I?