Summer in a Jar

I do buy a lot of my produce at the grocery store – it’s just more convenient than the market. I try to buy Canadian wherever possible, and organic when I can. With canned goods, it gets tougher: we use a lot of canned tomatoes and mushrooms, and I worry about the conditions the workers have been subjected to (particularly in the US, though Canadian growers are not always awesome employers for foreign workers either). So, I do what I can … and I can what I can.

My neighbour dropped off some giant zucchini that had escaped timely harvesting, and at the Fair this weekend there was an extended farmer’s market so I was able to pick up six big bags of tomatoes. Today I have cooked down two of the giant zucchini, some leftover veggies that were in the fridge, and all but two bags of the tomatoes. The resulting ‘thick juice’ gets acidified (for safe canning) and canned in jars – it makes an excellent substitution for a can of crushed tomatoes or tomato juice in soups and stews.

I also got a big bag of sour cherries from a friend, and I made jelly  out of those: I actually boiled up the cherries and strained the juice, then returned the pulp to the pot with a few cut up plums that were in the fridge awaiting some sort of fate, and a big jar of crabapple juice from the pantry, left over from the huge crabapple jelly making spree of a few years back. This meant I got three litres of juice from my gallon bag of cherries, and one whole water bath canner full of jam. 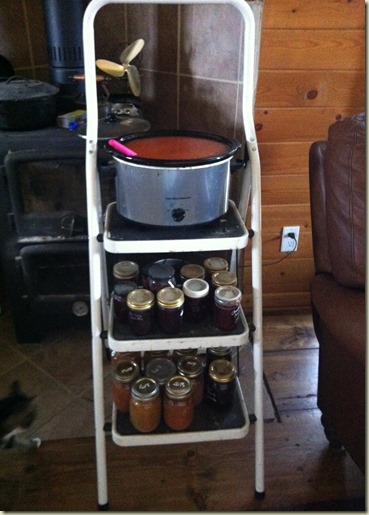 The jam and one batch of veggie juice are cooling on the rack, and the crock pot has been filled with the processed juice from several pots of zucchini/tomato/garlic/onion so it can thicken over the next day or so – the crock pot makes a nice gentle but steady heat so it will evaporate down but not scorch. To make the sauce I just cut up the vegetables (I used my awesome mandolin slicer that The Boy got me for Christmas, which made quick-cooking thin slices in no time flat) and cook them with a bit of water to prevent scorching until the whole thing is one big pot of mush. That gets run through the food mill (it needs the medium grate, otherwise too many zucchini seeds make it through), and the resulting juice is either canned as it is (well, with the addition of lemon juice and/or cider vinegar to assure acidity) or put in the slow cooker to thicken, and then canned.

Local tomatoes (and zucchini), and local jelly, eco-friendly and as ethical as I can get it.