A little while ago, there was talk in one of my favourite Ravelry groups of the ongoing projects some of us had on the needles that were destined to be gifted to other people. One of the knitters had a whole bunch of things on the go, and said “I wish someone would knit for me!”

Well, I was in the I-need-to-rest kind of place that day, plus I had the sense that there was a new design burbling somewhere in my head that needed to come out. I decided I would be the one to knit for her: I would design and knit a new shawl, and send it off to my knitterly friend.

And, that’s just what I did. 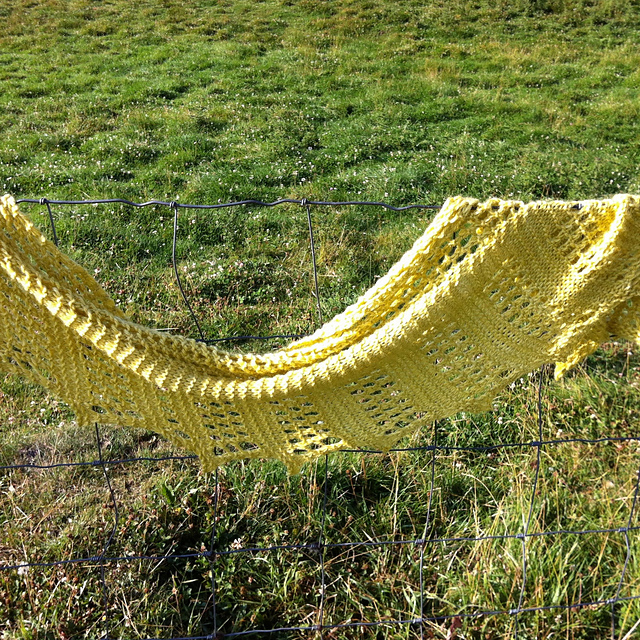 I looked through some pattern books, found a bit of inspiration, and sat down with paper and pencil and needles and yarn and started knitting. I had to restart a few times, as is inevitable when designing, but in the end I came up with a shawl that would knit up quickly in bulky yarn (I finished the prototype that very day), but would also work in finer yarns. As it is a tip-to-tip design, as long as you can divide your pile of yarn in half and the pile is about 200 grams to start with, you’ll end up with something workable.

The shawl is based on garter stitch and the ‘lace’ is just a matter of paired yarn over/knit two together stitches, so it is not complicated at all. The top of the shawl forms a slowly increasing (then decreasing) triangle – you can make it a shallow triangle by working increases/decreases every other right side row, or a more traditionally shaped triangle shawl by working the increases on every right side row. The border is really wide, but a very easy to memorize pattern repeat that forms small points at the bottom edge. 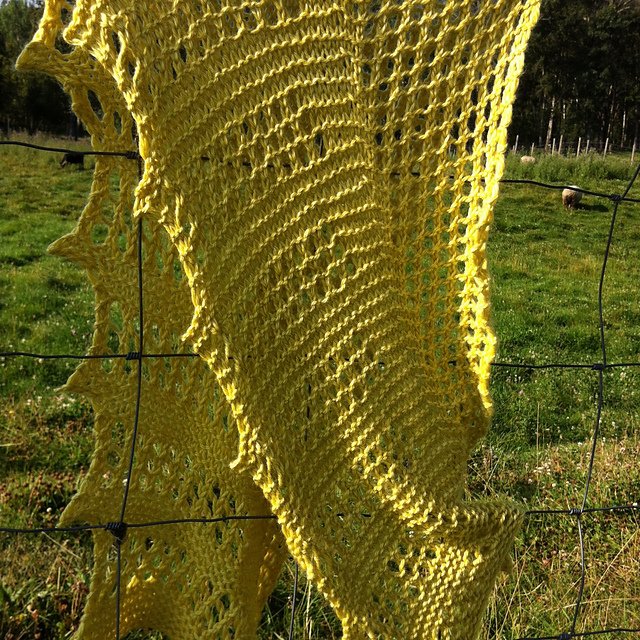 (Yes, those are sheep in the background.)

It’s been made in fine mohair, which creates a beautifully haloed fabric (worn by the knitter’s granddaughter as “her princess cape”), in bulky, super bulky, and worsted weight. All of them look great – hopefully the knitters will add their projects to Ravelry so that you can see them.