A cow with a bad attitude + half the milk she usually gives = two lines on the milk test! 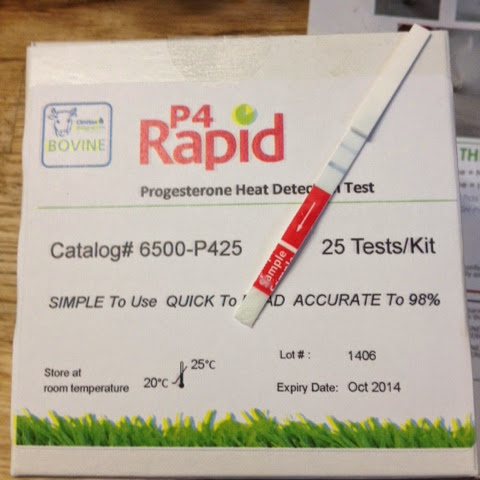 This is the P4 Rapid Milk Progesterone Test (available in Canada via Clintonix). It’s super simple: milk the cow, put a smidgen of milk in a little plastic vial (provided), drop the test strip in, and leave it for ten minutes. If you have one line, then she’s not in heat … two, and she is.
If you have a bull, it’s not a big deal to know when the cow is in heat – you’ll know, or he will, and it’ll be taken care of. And usually with multiple cows, you’ll know because they behave differently – Sasha used to stand at the fence and bellow when she was in heat, but now, it’s much more subtle. No bellowing, just a bit of pissiness when I went to bring her in for milking, and lowered milk production. But since I want to have her bred by AI this year, I need to know precisely when she’s ready – don’t want to pay the AI person to come all this way and then have it not take. Hence the test kit. I will test her weekly for the next month and see the pattern … then I’ll be able to predict within a few days when she’ll cycle next, and if I test daily at the likely time, I will be able to catch the right time and let the AI tech know we’re ready for her. She will bring sex selected Jersey semen – so we are almost guaranteed a female baby cow – and then I can test Sasha a few weeks later to confirm that the pregnancy took. If it didn’t, I’ll know, and we can try again. Technology is amazing.
The person on the other end of the email at Clintonix was very helpful, and I purchased 25 tests for right around $200, postage and all. I can’t imagine anything easier to use, and the test strips even ‘keep’ so if you want to compare a few to each other, you can do that.
Neat, eh?