Ben is really good for me.
He has come a long way in his training since he came to live with us in January of 2014. He still gets wound up when new people come to the house, but he is starting to believe that I am the boss, not him, and if I say it's okay then it's okay.  He is way more confident and content.
I've been taking Ben with me on errands to town all this past winter: he has a car seat and a safety harness and has had outings to the pet store and to pick up the kids from school. It's getting warmer, though, so I can't leave him in the car now... But I feel so much better when he is with me.
So... today I decided we would see how he does in public places.
Legally, he is a support dog, not a service dog (there is a difference, and the regulations are a little outdated, but anyway..). This means that he isn't guaranteed public access, but it's kind of a grey zone and as long as a dog acts like a service dog in public, problems are unlikely. I don't want to push the envelope or be rude or complicate things for others with more serious disabilities, so if challenged, we'd just leave, no problem.
But.
If Ben can accompany me to more places, I can do more at less of a personal cost. I don't know why, but having him with me helps.
So today we stopped first at the pet store and got a blaze orange vest for Ben. Then we went to West Edmonton Mall... on a Saturday.
Normally I'd avoid this at all costs, but my new lenses were in and I had to go pick up the Organic Box anyway, so off we went. I figured if Ben had trouble at the mall I could always take him back to the car, which I'd parked in the shade just in case.
We got gear sorted, left the car, and Ben  trotted along beside me, through the mall doors, up the steps, and into LensCrafters. Nobody seemed to think it odd. Ben sat down right at my side as soon as I stopped at the counter, and didn't make a peep. 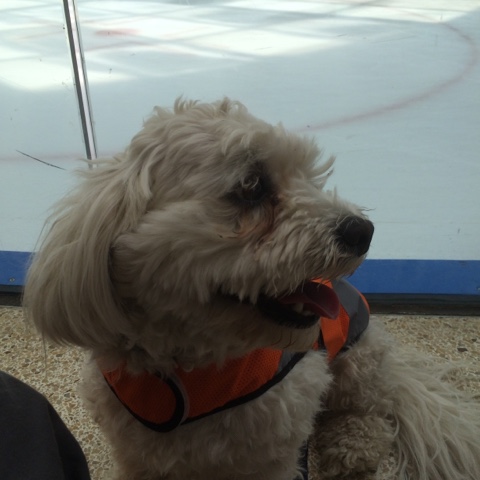 While the glasses were being fixed Ben and I walked the mall: up and down escalators (pretty tricky, but he figured it out!), past people eating, by fountains and shops and the ice rink and over the bridge in Phase 3. There were lots of "ahhh! Look at the cute dog!" comments, and a little kid in a stroller saying "PUPPY!!!", but overall everyone seemed to think it was no big deal.
Ben was clearly stressed by the experience but his behaviour was fantastic. Absolutely excellent. He sat beside me on the bench on Bourbon Street (even with all those food smells!), lay nicely at my feet when asked (in the bathroom and at various spots where I sat awhile), stopped and sat in heel position (usually without being asked) whenever I stopped walking. 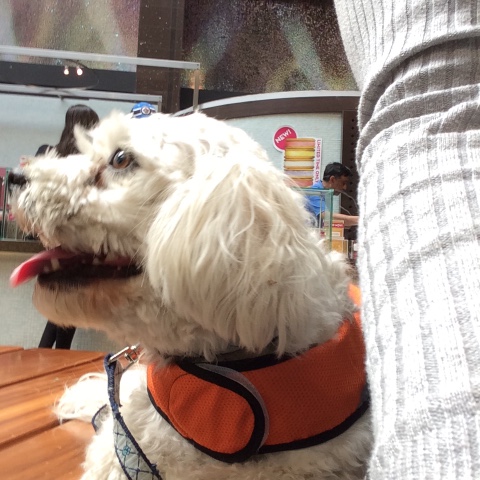 What a good dog.
I ordered a patch for his vest, now that I know he can handle public access: it says PTSD Support Dog.
This summer we are travelling to BC for a family meet up and Benny is coming along. I don't want to just leave him crated while we go do fun things, so I need to work on his training and give him the skills to join us on our adventures... Because sleeping without him is very hard, so he needs to come along, and doing busy things is somehow easier when he is beside me. Usually a trip to WEM on a weekend would do me in, but it took a lot less out of me today. And that's a good thing.
For the record, I would like to see broader and clearer regulations for people with support / service animals: right now, access is legally available for dogs that provide Substantial Services for People with Substantial Needs... but for people like me who do better with a dog but can cope without if necessary, there's no clear guidelines. Ben and I are in a grey zone governed by good will and common sense, which is not too tough in Canada, thankfully. But still. I'd go through testing or get a license if there was a way to do so.
In the meantime, Ben and I will practice behaving politely in public. Next adventure: a restaurant. :)