So I woke up this morning and saw this posted on our local buy & sell page: 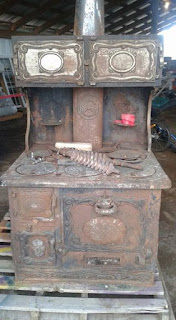 Yes, it’s very dirty and rusty … but it’s got potential! And it’s 36”x30”, which will fit in the space where the Bakers Oven is presently located – if the restoration goes well, anyhow. I love that it has a warming cupboard … and aren’t those little flip down shelves just calling out for a teapot?

The inside of the firebox was originally plumbed with pipes for hot water, but the block containing the pipes had cracked … got that out, and there will be a little bit of mending required to patch up the remaining holes, but that’s the only structural issue.
The rest comes down to elbow grease.

It’s actually a lot nicer than it looks at first glance … here are the doors for the warming cupboard, one that’s had a quick scrub and one that’s untouched: 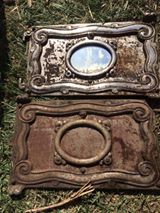 It’s shiny! And the little circle contains a mirror – one is missing, and the other is losing some of it’s silver, but I can get a new one cut at a local glass place, and probably re-silver the other one myself.
I didn’t even realize that the doors and trim were shiny until I started cleaning … I’ll need to pick up a wire wheel for the drill (aka a “whappity thing”) tomorrow so that I can really get the rust off of things, but with just steel wool and some bathroom scrubby stuff I got far enough to have high hopes for the finished stove. 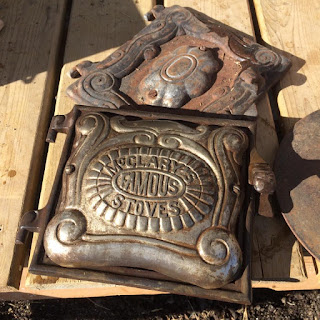 And this is the oven rack – fancy! 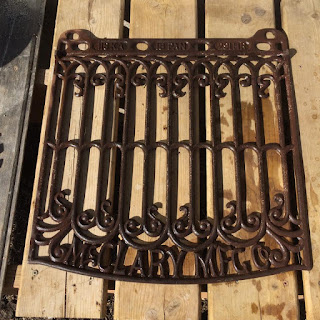 I’m quite excited to see how this project turns out … when we were originally getting a wood stove, we looked at these old ones, but most were too wide for the space we have and the reproduction ones are REALLY expensive. We settled on a Baker’s Oven (from Australia) which I really like, but if I can have an actual antique instead? Oh yeah.

Near as I can tell this model is from around 1910 – it’s a McClary Kootenay Range, which was made up until the 1920s, but the later models had more enamelling, so I’m thinking it’s in the older time frame.

This is going to be fun.