If at first you don’t succeed…

.. at least knitting makes it easy to try, try again. 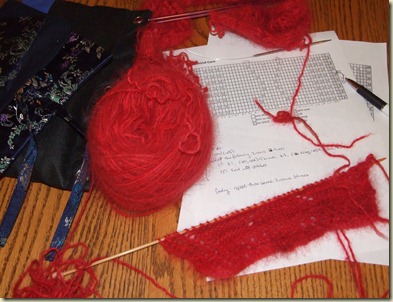 That tiny bit of knitting has taken days to accomplish. First, it was worked in a pattern I just now discovered is not available for use in the book, so that got frogged since the design is a scarf pattern that goes with one of the chapters in Just Keep Knitting. For the next attempt, I graphed out this really interesting gradual increase from a pointed beginning … and after multiple attempts to get that to look right, including three different sets of needles and four complete do-overs, I gave up on the approach entirely and went with a straight cast on and an integral lace border. That, at least, looked a lot better. Next was to start knitting the chart. One and a half repeats of that made it abundantly clear that the whole thing would look a lot better if the pattern started at the narrow end of the diamond and the yarnovers were on the other side of the decreases. Frog it back to the lace border and try again.

Now, with a straight cast on, an easy integral lace border and one full repeat of the chart worked, I am almost ready to say we might have a workable design here. Give me a few more repeats to be sure, but I think this might be the winner.

There’s a life lesson in here, I suspect. Continuing to pour your efforts into doing more of the same isn’t going to give you different results, any more than knitting more repeats of an unworkable pattern is going to transform into something lovely if you just work at it long enough. But, if you go ahead and say “ARGH!”, pull out the unworkable stuff and start over with a different approach, you’ve at least got a chance. It might take a few tries, but at least this way there is hope for a different – and quite possibly better – outcome!