A farmer kind of day

Go outside for morning chores – it’s a bit windy, but not too bad. Put hay in all the feeders, chase a couple of sheep back to where they belong, and notice twin lambs have just (JUST) arrived.

Get mama Cherub into the barn with her babies, and get her some hay and water.

Go check on Mackenzie the guardian dog who has been limping badly for three days. Notice that today there’s a small wound on the sore leg – didn’t see that earlier, maybe he’s been licking at it. Worry more because bone cancer is very common in these big dogs, and that’s a prime location for the tumours to start. Trim the fur off the area, put some antibiotics on it, and ponder.

Notice that the smaller of the twins is shivering and doesn’t seem to have been dried off very well yet. Take him inside to towel him off and let him warm up a little, let the cats take turns licking his fleece. 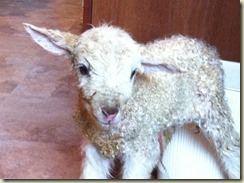 Return him in a little lamb coat to his mama – but the lamb coat must smell of whoever wore it last because mama doesn’t like him wearing it. Take it off and hope mama’s mood improves. Remember that she is usually cranky right after delivery but smartens up over the next day or so. Lecture her a little while trimming fleece off around the udder so the babies can find what they need.

Head inside and call the vet. Yes, they can see Mackie today. Well, the last time Mackie went to the vet he busted out of the crate he was in, then had to be dragged in the back door of the clinic because he refused to go inside. The Boy and I get the van ready, and drag Mac out of the dog house where he is hunkered down. He doesn’t want to walk. We drag him partway to the van and he figures out what we want, and trots along beside us in his three legged way. I get in the van and haul on the leash while the boy hefts the dog’s rear end up and in, and we are off to the vet. Mackie actually relaxes and lays down. 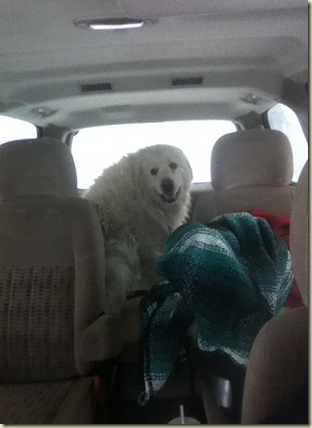 A blizzard has started. Visibility is awful, the ruts in the road are grabbing the tires, and there’s ice underneath. We make it to the vet’s office.

We let Mac out of the van and he actually *walks into the vet clinic*. No fuss, nothing. He even gets on the scale (143 lbs, he is a BIG DOG). Doctor Sarah looks closely at the wound and sees that there are, in fact, two tiny puncture wounds – one very deep (the one I had noticed this morning) which is bleeding fairly well now that Mackie has had a chance to warm up, and a shallower one about a centimeter away: she figures maybe a weasel or a stoat got him. Defending the sheep from weasels? The Reluctant Farmer thinks it must’ve been one of those dangerous vampire gophers, but whatever it is, it’s just an injury not bone cancer and I am tremendously relieved. Mackie gets his vaccinations while he is there (I am still shocked that he cooperated with the whole trip, I think it must reflect how much pain he is in for one thing, and also that he’s come to trust us more, for another). Antibiotics are prepared for us and we head home in the snow.

By the time we reach the house, the snow has let up, though it looks like we have more on the way. We bring Mackie inside and feed him warm dog food, brush is matted fur a little, and give him his meds, then let him outside as he is panting in anxiety – he hates being in closed spaces and has been known to dig his way out of the barn. I feed everyone, check on the animals again and see the baby lamb still looks chilly. I put the coat back on him, which Cherub isn’t thrilled about, but he’s cold and she needs to deal with it. I also get her up and help him get a bit of milk – if she rejects him I need to know for sure he got some colostrum in his first day, and he needs a boost of energy. He seems all right, so perhaps he’s getting some milk but best to be sure.

Finally, I can sit down with a mug of coffee and get warmed up and ponder what I intended to get done today … oh yeah, weaving. Well, animals first. Now that I’m in though, maybe I can head up to the loom.