At my counselling session yesterday, we were talking about the  Scared Girl, the Not Good Enough Girl, the Angry Girl … all those personas inside my head who each have a job to do, but sometimes try to take over when their help isn’t really needed. Each Girl has a name and an image in my mind … my Scared Girl wears flannel pyjamas and hides under the bed most of the time, whispering to everyone else hold still, don’t make anyone angry, just hide. My Not Good Enough Girl stands there in a very prim skirt, low heels, beige nylons, and a buttoned up white blouse, her hands on her hips as she chides me for being inadequate. The Angry Girl has a leather jacket, ripped jeans, scuffed steel toed boots, and a pair of brass knuckles - she shouts and curses and yells and wants to hit things.

Mostly, these troublesome girls have quieted down now that I’m appropriately medicated, and for this I’m profoundly grateful. Still, I know they are there if I need them … and I’m also aware that because I’m so sensitive to stress and prone to feeling unsafe in perfectly ordinary situations, the Girls might jump out and try to help at times when I don’t actually need them.

Yes, if I’m truly threatened I will need my Angry Girl to stand up and say “No further! That’s enough! Stop there.” However, I don’t need her hitting anyone or yelling mindlessly – she has to communicate clearly, to fight fair, to be honourable. I don’t really want a street brawler who is always spoiling for a fight living inside my head.

So, I am going to send my Angry Girl for martial arts training. She’s going to become a peaceful warrior, one who will fight honourably in defense of herself or those she is responsible for, but who will not seek out an argument and will avoid violence, using only the amount of force necessary to evade danger and remain safe, no more.

Now I know that the samurai of history who developed the martial arts were in love with violence and death and I am, truly, a pacifist at heart … but there is much in ancient Japanese culture and martial arts philosophy besides physical violence, there is much that is beautiful and not inconsistent with my beliefs. I took a few lessons in Aikido when I was in university, and the idea of turning the enemy’s strength back on them while evading their blows really resonates with me. You aren’t out to beat someone up … just to safely get out of the way and convince the person that attacking you (or those you are protecting) was a very bad idea.

If there was a way for me to go to Aikido classes, I think I’d probably sign up again. I’d really like to use a quarterstaff, but reason tells me I’m not likely in any shape to even practice something so physically demanding. So, for now, I’ll see what I can do about reforming Angry Girl into an Honourable Warrior through mental discipline … and a wardrobe change.

Warrior Girl has set aside her leather and denim. She is now wearing plain peasant hakama and an indigo jacket. The brass knuckles are gone, instead she carries a wooden staff that serves as a walking stick to help climb the bumpy spots on the trail, and as a defensive weapon to ward off predators on two legs or four. She carries no swords, no tools of death … she is a pilgrim walking the Tokaido Road in search of peace, helping others as opportunity arises, always headed towards the sea.

On her jacket, at the centre back, is the mon: the crest of her family. 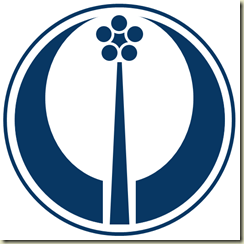 Encircled by the wings of a crane is the staff of a pilgrim and a flower blossom: the crane for longevity and peace … the pilgrim’s staff for support, safety, and the ongoing journey … the flower for hope, life, and beauty.

I may need to make myself a haori jacket with this symbol on the back. And find myself some hakama … they seem like they’d be terrifically comfortable.