When we went trick-or-treating at Halloween, one of the houses we stopped at had several new barn kittens that were in search of new homes. Well, we have plenty of mice (leave a pile of lumber out for a day and it's got mouse turds on it, ick) but no barn. So, we said we'd be back and set about preparations. At Habitat for Humanity I found a cube that must have once been part of some office furniture - it's laminated with that typical office fake wood stuff - and last weekend The Boy and I cut a door in it, then insulated it with styrofoam insulation and a mylar emergency blanket (to reflect the heat back in). Tuesday night we went back to the house that had the kittens and picked out two from the four that remained. Here they are! 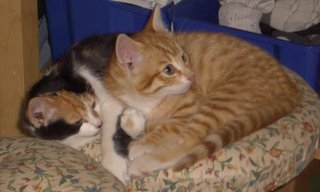 Their names are Diesel and Mikan ... Diesel is the calico, and she's called what she is because when she purrs she rattles almost as loud as my truck! Mikan is the Japanese word for Christmas oranges (if you get the actual Japanese ones, you can read it written on the side of the box ... well, if you can read Japanese, anyway). So, the orange one is called Mikan (it's pronounced meeee-khan).
They are absolutely adorable when they chase and attack one another, and they seem to have figured out that we are the Providers of Food Water and Warmth, and we're hoping they soon decide to decimate our mouse population.