Curiosity and the Cat

Well, we all know what curiosity did to the cat.


Mikan has, apparently, suffered that fate.


The crew was out doing backfill around the house this week, and the cats seemed fine all day. When The Boy went to let them in, though, only Diesel returned. There was no sign anywhere of Mikan. We suspect that he was checking out the trench and got backfilled in place. :(

So, we were left with one lonely and cold Diesel, who had nobody to help keep her warm at night and keep her company during the day. We went back to the place we got Diesel and Mikan, and there were 2 more kittens (from a different litter, so slightly older) who were still waiting for homes ... and we brought them home. At least now we are "resourced in anticipation of possible attrition": if we lose one more (heavens preserve us), the one who is left will at least have a buddy to keep him or her warm.

So, I now introduce to you our next two members of the acreage crew: Moke and Shadowcat. 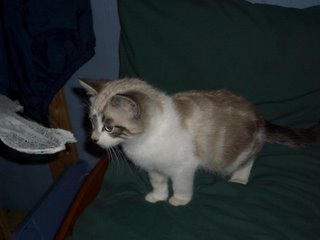 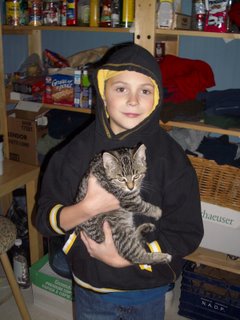 Moke is the way that The Boy pronounced "smoke" when he was very small - there was a huge forest fire around the time he was 2, and the smoke drifted through the streets. "Moke, Mommy!" he would announce. So, the light gray and white cat is named Moke cause that's what she looks like. We struggled with finding a name for the lovely dark gray cat, and settled on Shadowcat because his stripes and dark coat would colour him perfectly for hiding in the shadows.

So, that's our animal situation for this week.

The house progress ... well, we have the roof going on today, and oi! I just remembered I have to call the Natural Gas people so they can fax me a work order. I'll go do that. More later on this same station....