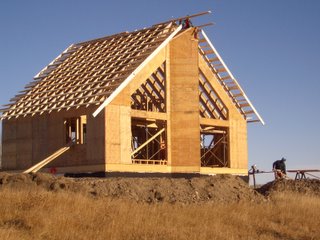 It was a reasonably warm day, all things considered, and that's a good thing - the crew were up on the roof most of the day getting the "peak" at the front to sit exactly right. It was a lot like the final fitting of a body-hugging dress ... try it out, adjust a little, try it again, adjust it some more. By the end of the day it was there, and with just a little more tweaking we'll be ready for roofing. 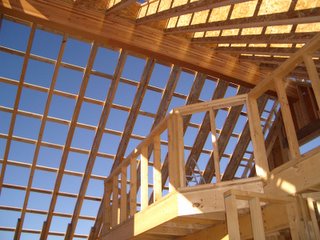 This picture shows a good shot of that interior beam that we had to put up (see the "Dancing in the Dark" post) - it sure does look pretty. The spaciousness of the loft continues to surprise me ... no wonder The Boy is so excited about having all that space to himself! Even with the roof on, there's still a lot of headroom and floor space in general. 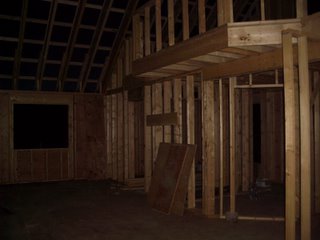 I spent the day pulling nails out of boards. I cleared up a lot of the lumber around the house, since we'll be getting backfill in early next week and that all has to be out of the way. I also pulled out the interior braces, knocked the nails out of those boards, and piled the lumber up for reuse on another project or somewhere else in the house. The inside looks a lot bigger now that the indoor obstacle course has been removed! The Boy spent much of the day feeding wood scraps to a fire. :) Oh yes, Solar Dude (that's what The Boy calls him) came out and confirmed that we've got a good location scoped out for our solar panels, they won't be shaded by the trees or the house. Tomorrow, Solar Neighbour and I are going to start wiring ... it's getting closer and closer to being a house we can live in!