The house is Tyveked, and the windows are all in!
The guys worked hard today, I'm told that it's tough to decide if this was harder than putting in that ridge pole in the dark or not (see the Dancing in the Dark post if you don't know what I mean). Union Guy thinks this was tougher - the windows were very heavy and they had only one super duper suction cup thing to hold them with. 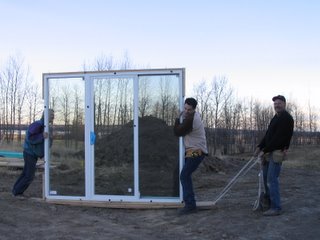 They made a sled to slide the windows from where they were stored in a big crate ... notice the gray cat sitting on Contractor Man's feet. That's Shadowcat - he'd just been told that there were no free rides, as he'd been sitting on the sled riding along! 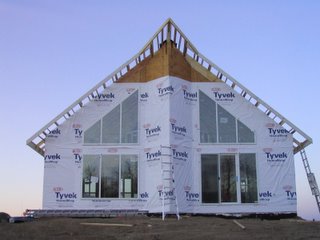