The last load of material arrived yesterday, so we now have roofing, rafters, siding, insulation (yay, warmth!) and windows.

Today was spent squaring the house - Contractor Man had to climb up on the ridge beam on Tuesday and use a chainsaw to trim that long centre beam, as it was a bit too long ... that had to have been interesting! No pictures of that, sadly. Anyway, with comealongs, tow straps and chains and lots of checking with the level, they got everything squared back up again and started putting up roof rafters. Photos of that tomorrow! 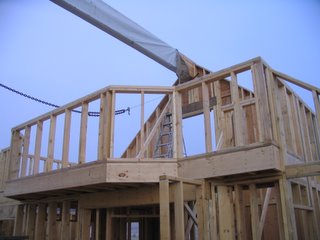 The loft is finished and looks really neat. I had thought it had an open front with railings, but apparently the pony wall goes all the way across. That'll work out fine. It's nice and spacious ... The Boy continues to be impressed. We'll see if he's still impressed when the roof rafters are in place and he sees that his ceiling doesn't go all the way up except in the centre ... but then again, he hasn't had his big growth spurt yet so for a few years it'll still seem big.

Contractor Man has taken to calling That Really Nice Guy (who has taken time off his software development job to help with construction) "Union Guy", after hearing him comment one day (when lunch break was called at 2 pm) that he was going to have to speak with the union rep. Since then, lunch tends to be called a little earlier, and Contractor Man just asks me "Is that Union Guy available to work on Friday?" So, I think from now on we'll call him Union Guy. I think he likes the change of pace from building stuff nobody can see to actually hammering a building into place. Works for me, we can use the extra hands!

So our other really good news is that we have a roofing contractor. The metal roof needs to be installed by professionals, as it can be a bit dicey. Of course, I didn't discover this until last week ... so I sent out a few emails, and actually got a reply from someone who is - get this - available next week to do the work! Yay! That is exactly when we need them. They happen to be between two larger jobs, and I should get the contract faxed to me tomorrow. Yay! A roof!