When Bob went MIA, we were seriously worried that he would not be found. As I do risk management for a living, we now have a succession plan in place. :) 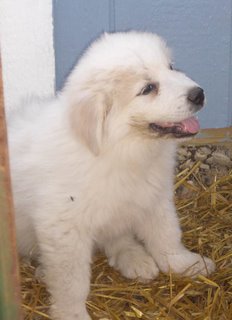 McKenzie is a purebred Great Pyrenees, a very common sheep guardian dog. They grow to be absolutely huge - he will be bigger than my Akita was, but since he will always live outside with his sheep, I won't have to worry about him putting his nose on the dining room table!

Bob, as senior guardian dog, is doing a good job of training the new recruit. Actually, McKenzie shows a very strong instinctive need to be near the sheep - which is exactly what we hope for! He was born in the pasture to sheep guardian parents, and spent the first six weeks of life with no contact from humans at all. When the pups were six weeks old, the people went and took them from their momma (who apparently did not object), and housed them in a sheep barn where they learned that people are the nice big creatures who bring you food! As humans we spend very little time with the dogs, so that they will bond closely to the sheep. The hardest part of raising a puppy like this is resisting the urge to pick them up and cuddle them! 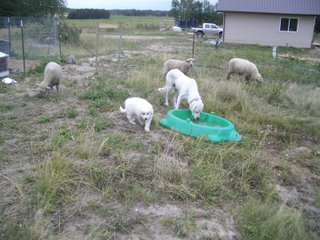 Union Guy purchased McKenzie for me as a present. :) What a wonderful gift! It's so great to watch this little ball of fur following the sheep around the pasture on his tiny little legs, or sleeping as close to the sheep as they will allow, or trying to convince Bob that playing would be lots of fun (Bob just ignores him when he gets like this).

So far, things are working out well: Bob tends to look after the bigger picture, sneaking out under the perimiter fences to check the area near the house and occassionaly the neighbours' land as well, and he barks when he sees or hears anything potentially threatening ... McKenzie just patters along after the sheep, staying close to them and looking like an adoring cherub. As he grows, he will start 'guarding behaviours', like marking territory and learning to bark at specific things. By Christmas time he should be starting to show a lot of these behaviours, and he'll be much, much larger!

It's true that at night it is sometimes noisy around here ... but the deep woof of Bob's bark is very comforting, and I'm learning to sleep through it. It's much nicer than the yip and howl of the coyotes, which wakes me and used to leave me worried that the sheep or chickens were in danger of imminent attack. With the dogs on duty, I just listen for their bark and know all is taken care of!