Not a best seller like Saving Fish from Drowning, but hey.

Trees that are too near the road and/or under the powerlines will eventually be brush hogged – mowed down by a great big mowing machine that essentially mulches everything in its path. So, digging up trees from that space beside the road or out from under the power lines is a way to save their lives … and an inexpensive way to landscape our property.

We need more trees. We really need a good wind break along the north border, behind the house, as the wind usually comes from the northwest and it’s been shown that a proper wind break of heavy trees can actually reduce your power bill considerably. Plus, when you drive up to our house it’s not really very attractive – the front of the house faces south, so you arrive at the “back” of the house, where all you see is a plain row of windows and nothing very inviting. Trees and some better landscaping (and tidying things up) will make it look much better, and it’ll have the added advantage of breaking up the wind.

So, I decided to go out and gather up some trees to start the landscape project. I’ll need to plant some more and make the belt a little thicker, but for starters, I took the quad and the trailer and headed down the gravel road looking for trees (particularly evergreens) that were in the brush hog zone. I found quite a few, actually, including a few larger trees that had escaped last year's mowing and grown to a decent size. With the trusty tree planting shovel that my sister used for four summers of back breaking work, I dug up trees and loaded them into the trailer. 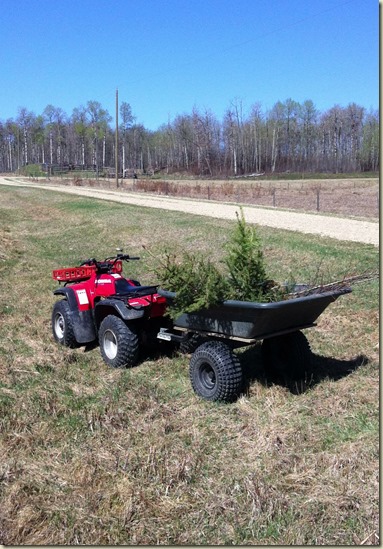 Boy oh boy do I love having the quad. I know, I always said we didn’t need one, and I was so very wrong. Especially as my energy levels go down and my body can’t do as much, having a tool that lets me go longer distances and haul heavy loads without using my body’s limited resources is just wonderful. I blessed the neighbour who gave it to us again today as I worked, believe me.

So, a load of trees came home, most of them with considerable soil still around the roots. None of them had travelled far, and the soil is pretty similar, plus I figured keeping them covered in damp earth while they were being transported would be good for them. Once home, The Boy helped out by removing the fence that was along the north border (not a very good fence, it wasn’t sturdy enough to hold anything in and mostly just got in the way) and then I started digging holes and planting trees.

I also went across the road to where the power line comes up to our house and dug up a few large poplar trees from underneath the wires. It’s nice to have a few trees that are tall when you are starting out, so it’s not just a row of teeny seedlings.

This is right by the driveway, you can see the rocks that mark the edge of the culvert that goes under the access from the main road. I put a few little dogwood trees down there near the culvert, as they like moist soil and the ditch stays reasonably damp. The nicest, tallest evergreen went right at the corner – maybe we’ll get some solar Christmas lights for it this winter. The other trees are staggered along the north edge of the property in a bit of a zig zag pattern rather than a single straight line … I’ve been reading permaculture books and straight lines just aren’t a natural thing, plus I want to avoid creating a wind tunnel when the wind is coming from the west, so breaking up the tree line a little is important. Besides, grouping the trees in little clusters will provide more visual interest and eventually give me little mini climate zones where I can grow smaller shrubs and maybe even flowers – though since the grass is actually quackgrass, whatever I grow has to be reasonably easy to mow around, so probably bushes and shrubs which can stand up to having the weed whacker run nearby will make more sense than flowers.

I found some big rocks and set those out next to the smallest trees so that I don’t accidentally drive over them or mow them down. I also moved the Blue Sign (the county address sign) down to the edge of the driveway and put a couple of large poplar trees on either side of the posts that hold the sign. You can’t really see those trees in this picture, but they’re there. I think I’ll try to plant some morning glories or another climbing plant under the sign and it’s supporting posts, and see if we can get something to grow in all that grass. 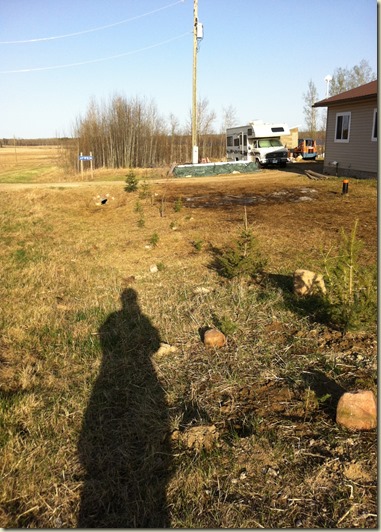 It’s still pretty rough looking, but it’s an improvement. The Boy and I also raked up all the leftover hay from the yard and he hauled it to the garden where it will serve as perimeter mulch: in the Ongoing Battle Against the Quackgrass a solid mulch at least a metre wide around the area you want kept clear is the next thing to try. All that mouldy hay has gotta go somewhere, so that seemed like a good place for it. The trees all got a good long soak from the rain barrel hose while I raked up mulching hay, too, as they need lots of water after they’ve been transplanted and I could just move the hose from one tree to the next as I worked.

After a day like this, I’m all out of strength … thank goodness for Advil, or I might be unable to move. Still, it was a good day for this kind of thing: the weather was pleasant but not too hot, I needed a sweatshirt on most of the day, but nothing more than that. Hopefully most of the trees survive the transfer … but if not, at least we’re not out any money, and Mother Nature will provide us with more if we’re patient.