Spring is crazy busy on a farm

Springtime is nuts around here.

The weather has been a bit crazy – it’d warm up, then we’d get a heavy wet snow blizzard, then it’d warm up some more … the winter felt like it went on for absolutely ever this year. Of course, last week, after having most of the snow melt and some beautiful work-outside-kind-of-weather days all in a row, we got another late storm, super windy and wet and snowy … so of course we had twin lambs born that morning, and then another single born that afternoon! The twins were very cold and had to be brought in to warm up, tube fed colostrum (they were too chilled and weakened to nurse) and given a boost of oral glucose to get going, but they did perk up and are back with mama who loves them both, thankfully. All the lambs born that day are boys, haven’t come up with names for them yet. 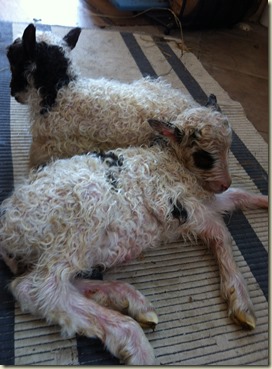 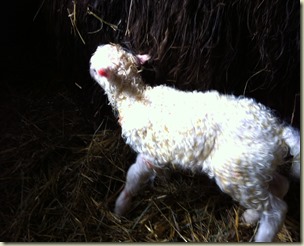 On the warm day before the storm, I went outside and did some work on the front steps: our patio door opened out onto a low temporary deck that’s been there since the house was built, and it was time to replace it with something sturdier (and with less of a steep drop when you stepped out the door). I’ve been reading permaculture books lately, and so I had the thought of putting some garden space right outside the door for herbs and things you’d like have within reach of the kitchen. This led to the idea of a set of raised beds with steps in the centre, and so with stuff I found around here already, I was able to build something that works. Today I gave it a few coats of stain, so it doesn’t look like the scavenged and mismatched wood that it actually is. I do still need to add the trellis supports for climbing plants (I saw a climbing strawberry plant that I think would be really neat, or perhaps a grape vine, to take advantage of the extra warmth up here by the house). The beds are presently mulched with straw, and my Easter lily got planted though the snow may have done it in. 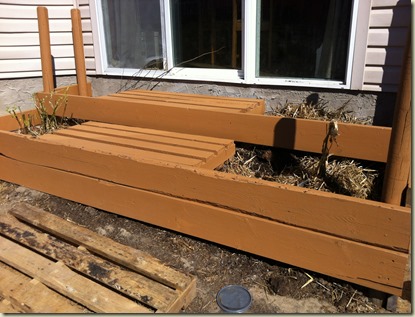 On the left side of the bottom bed there are some twiggy things: I went to a workshop hosted by the county on starting trees from cuttings, and learned how to start willow, dogwood, poplar and aspen from cuttings. The twiggy things there are rooted cuttings that are in some pots of soil so they can develop sturdier roots (not just the ones they put out when they are in water), and then they’ll be planted around the property. Free trees! From local stock! Perfectly adapted to our climate! There’ll be more on this topic soon, I have some big plans (those permaculture books got me thinking)!

Today was a day to work on fences. Our infrastructure is still evolving – not something I’m really all that pleased about, I’d like to have gotten things more settled by now, but, it is what it is, and as we change the way we do things, we keep finding better (or hopefully better) ways to deal with the shape of our land and what’s on it. The wind tower has three big guy wires that keep it stable, and the animals rub on the wires, loosening them. Today’s job was to adjust the fence line so that the entire wind tower and its guy lines are enclosed by fence (actually that’s not quite true – one of the anchor points is still outside the fence, but there’s another fence going in that will protect it). The Boy and I took down some very ragged and damaged fences then put the posts back in, tightened and attached new woven wire, and cleared up a lot of the mess of broken fences, leftover posts and destroyed gates that had accumulated in the general vicinity. We also mounted some ‘lamb stoppers’ along the fence and gate: there were some gaps big enough that small sheep could pop out through the fence, and I need to know that the lambs will stay inside the fences before I start planting my garden!

Lamb stoppers are just chopped off bits of trees nailed to the fence to make the gaps too narrow to fit through, even for a little sheep: 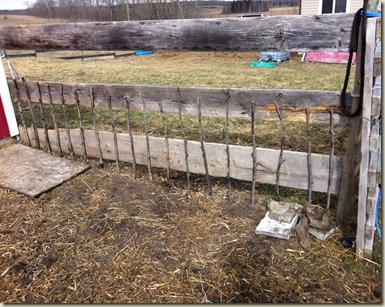 Nothing fancy, but I think it’ll work. The price is certainly right.

There’s a lot more fence work to be done, but what we did today should mean that we can keep everyone reasonably well contained until the pastures are green enough to let them out to graze. We have some more water and pasture access changes to make, so there’s a few more big fencing days ahead still.

Ah yes, pasture. Since the grass isn’t ready for grazing yet, we’ve still got everyone on hay. We’re all out of the hay we had delivered, but there are some bales in the pasture that belongs to our neighbour that we are able to use – they’ve been sitting there for a couple of years, but when I was out there last week, I noticed that though they’ve been sitting a long time, they had been baled when the hay was nice and dry and so they are not mouldy or anything. They still smell good! The Boy and I took the quad and the big trailer and headed over there to load up. 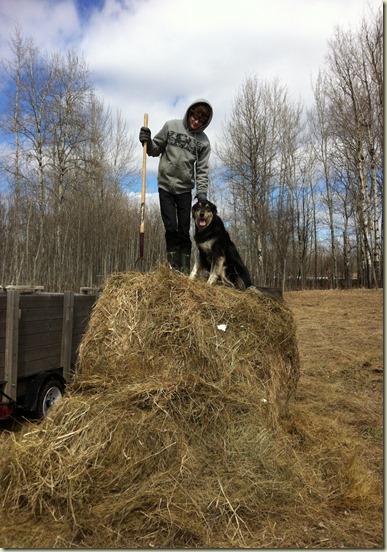 A Boy and his Dog … and a haybale. 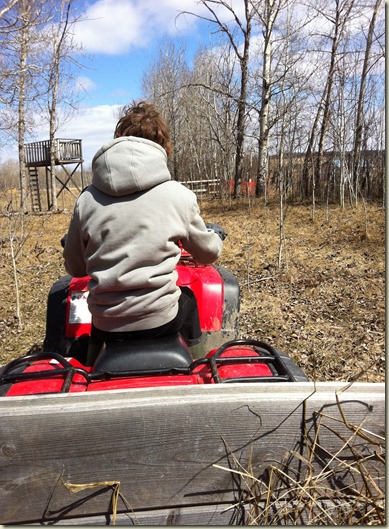 I rode on top of the hay wagon on the way home. :)

It’s just grass hay, nothing spectacular, but there’s plenty of it, so we feed generously and everyone seems reasonably content.

I’m rather stiff and sore after all that work, but tomorrow I have a baby shower to go to so I’ll have some enforced relaxation time before I get back to the outside work.