Yes, I have spun a whole kilogram of Frazzlebatts. 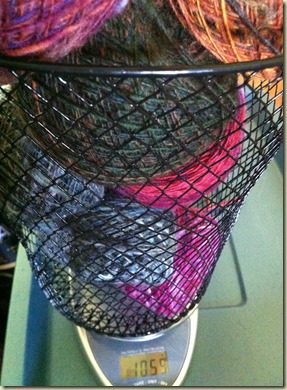 1059 grams. That’s just a wee smidgen over the one kilogram of Frazzlebatts, which was my goal.

And the Tour doesn’t officially end until the 21st, so I am done EARLY!

And now for the eye candy… 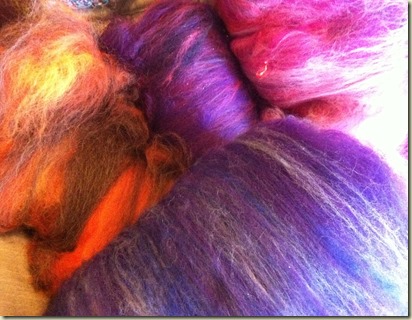 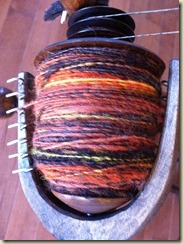 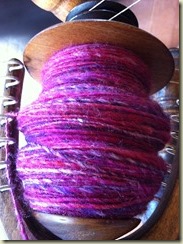 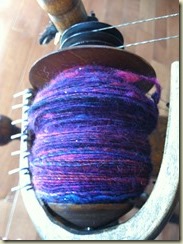 Group photo of everyone all together at the finish line: 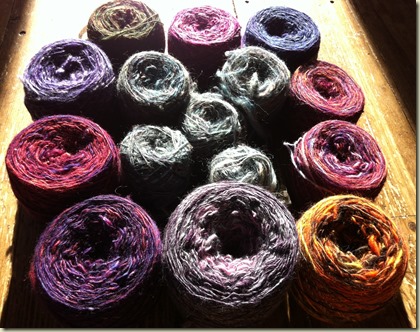 Some of this was spindle spun, most was done on the Canadian Production Wheel. I’ve not had the energy to do much wheel spinning for the last couple of years, but I was finally in the mood to just sit down at my beloved wheel and let ‘er run. I worked hard to keep the singles fairly thick (all things considered – that’s not to say I spun bulky by any stretch, just that it was about double my default thickness). My next job is to ply: the first stuff that was done, the sort of hairy frizzy light blue and gray, will be plyed against itself and probably used for a small bag of some kind as it’s got that ‘sturdy’ feel to it (I have no idea what all is in it, that one was a blend of some stash mystery fibre plus Corriedale from the Batt Bar). The rest is likely to be plyed against things I have in the stash – stay tuned for some more interesting experiments in that regard.

In addition to finishing off my Tour goal today, I also went outside and did a bit more work in the barn (getting it cleared out is a nasty but necessary job), and thought a bit more about the fencing changes I plan to make while I shovelled.

I may actually go do a bit of plying now – the Babe is waiting for her turn to contribute to the Tour’s adventures. Maybe I can get all this stuff plyed up by the official end of Tour … maybe. No pressure though!