I am really not sure what the level above “trifecta” is but I think even if there is one, I’ve exceeded it. I am declaring this last accomplishment a Gold Medal achievement.

If you’ve been following along, you know that I have been bitten by the reorganize/tidy/clear out the old stuff bug lately. I reorganized the north wing living area (because I wanted my chair by the window, and then everything else shifted) and followed that up by clearing out the loft (including building a reading/spinning/knitting nook out of an Ikea bookcase).

We have lived here for … what, seven years? eight? Somewhere in there. And the ceiling just never got dealt with. We made an attempt with some panelling, but it was unwieldy and didn’t look good. We would have put the same stuff up as is on all the walls, but whoa, talk about a fussy job. It would take ages. And it would require a person lift of some kind. A contractor would make more sense. But there was no budget for a contractor.

And then, some money arrived unexpectedly. Let’s just say it was a much appreciated gift that gave me the freedom to actually do something about the ceiling.

So I went to the city, talked to the helpful people at All Weather Wood and came home with enough materials to experiment with cedar shingles on the ceiling. I started in the loft, where I could work without needing a ladder for some distance, and after some false starts and modifications, I decided it was worth continuing. Then I fell off the ladder. Gently, really – I fell forward, not backward, and banged my legs up on the way down, but it was enough to make me realize that this was not really a workable strategy.

Take home message: using a ladder leaning up against an inward slope is very dangerous. DO NOT TRY THIS AT HOME. 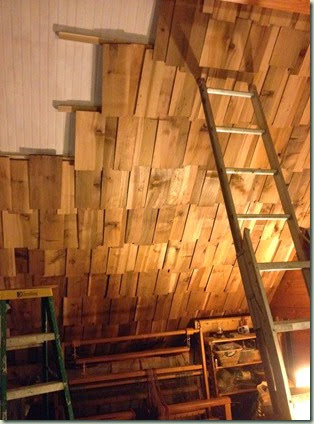 I phoned the nice people at DV Rentals and arranged for scaffolding. Voila: a workable strategy. More wood, proper infrastructure, lots and lots of nails for the air nailer, and we were off to the races.

(Yes, there really was a platform that went from one side of the scaffold rack to the other, but we’d relocated it temporarily when this was taken.)

When all was said and done … 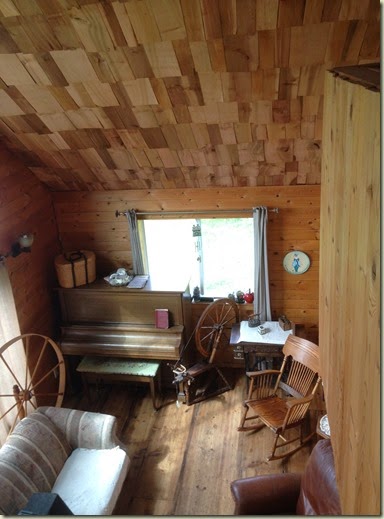 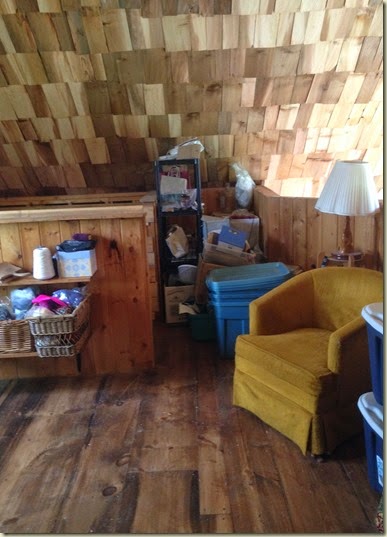 No, it’s not perfectly even. I knew I’d never get it even, so I staggered the shingles on purpose. They stagger a little more than is reasonable in a few places, but oh well. There’s also one spot above the fireplace that I just could not reach safely from the scaffold: the frame wasn’t wide enough to scoot past the wood stove, and after leaning as far out as I dared, I decided that perhaps The Reluctant Farmer (who is, after all, a firefighter who runs training sessions on safe ladder usage) might be able to get up there and deal with that one tricky spot some other time. Not falling from two floors up seemed fairly important right about then. I did a lot of very slow moving while on top of that scaffold: reaching up to support myself on the ceiling as I walked, crawling from one end to the other rather than walking, lying on my back and doing Michaelangelo imitations, you name it.

I didn’t have enough stain to cover all the new boards I put up, but those can be done with a stain pad on an extension pole at a later time. There are still some pieces that need to be put up, but most of what’s left is finicky fitting that I am really quite terrible at doing, but the thing is …

I can live with this.

It feels much more comfortable.

I realized that I’d been avoiding spending time over here, avoiding organizing and cleaning it up because it just felt like a construction zone anyway. There’s one noticeable place that needs to be covered up before that sense is completely eliminated, but my goodness … to glance up and see wood instead of vapour barrier and insulation? To have the ceiling covered (with real wood and an air pocket which will add more insulation value to the roof as well)?

It ain’t perfect, not by a long shot, but I did this and it’s damned good, if you ask me.

I am bruised all over – the fall actually didn’t damage me too badly as we instituted proper first aid measures immediately, but all the pressure points of legs and shins and arms where I braced myself against scaffold pipes are turning blue. My hands ache from gripping the air nailer – it got heavy after three days of use. My shoulder muscles are sore from so much lifting over my head (even though The Boy did the vast majority of the heavy lift-and-carry-fetch-and-lug work for me, bless him).

But I am sitting at the kitchen table looking out the window … and not seeing any yellow insulation or floppy plastic, the whole house smells of cedar, and I am content.

Many thanks to the generous provider of these funds (you know who you are): you didn’t have to make the choice you did, but you did, and I am grateful.

And deep appreciation to The Boy, who hauled and carried and tolerated the noise late at night and loaded and unloaded the van and let me use his vehicle to haul materials and scaffolding and fed me and brought me water and lemonade and gave me ice packs when I fell and spotted me when I had to use the ladder again later on and delayed taking a shower until a time when I wasn’t up on the scaffold, just in case. Couldn’t have done this without your help, Boy. Thank you so much. You are a very good kid.

And now I think I might go lie on the couch and stare at the ceiling or something.

Because you know what? It’s awesome.