… than to work around the house for two days barefoot.
I used to have no trouble, but my joint issues will give me nasty aches if I do not wear supportive footwear (I like my orthopedic Crocs quite a lot, actually). Still, I kept thinking “just a few more minutes” and that turned into most of yesterday and pretty much all of today. I slathered Volatren on them and am now sitting Gram’s chair with my feet up.
See … it all started when I decided that I wanted my chair next to the window. When The Reluctant Farmer isn’t home, I often sit in his chair, because it’s by the window and has a table next to it for your tea or coffee but I like my Gram’s chair best of all, and it was on the other side of the room. So I moved it. But that meant moving the couch. Which meant moving the bookcase. Which meant taking all the books off (we had intended to sort them anyway). Which led to the realization that I had another small bookcase upstairs now freed up since Flannelberry Creek has moved out, so I brought it down and put some more books on there. Then I noticed that the space behind the couch, which is sort of an office and a complete disaster area, could benefit from two more shelves I had upstairs, so I brought them down as well. There’s still a few piles of things in need of sorting, but overall, things in the North Wing are much, much tidier.
And the floors all got swept while I was at it.
Gram’s chair:

What I see when I’m sitting there (like I am right now):

So that was yesterday. Then I got to thinking, you know, the South Wing is a real mess and needs some work. I should tackle that today.
It was a much bigger job, but tackle it I did. There are still several fairly large ‘landing zones’ of stuff in need of sorting (much of which will leave here, no doubt), but I made some pretty major changes. The bird cage actually sits quite perfectly on top of Benny’s crate, which puts the birds nicely at eye level and freed up a table. The table went to the front entry to replace the bench, which opens up and stores mittens and stuff inside but is always piled high with stuff so you can’t even sit on it. Clearly we need a *table* in that spot, not a bench. And a table you can put boots under would be even better. So I did that, and brought the bench – which my father made for me when The Boy was just a tiny baby – into the South Wing. It now stores yarn stash!

Because it’s wonderful having the yarn nearby, and I can actually fit a good portion of what I own in here. Not all of it, there’s still more upstairs, but the loft reorganization is on indefinite hold … that one is a big job, and it’s ignoreable, so I’m ignoring.
Anyway, I had a lot of things to shuffle around … the cream separator needed to be in the kitchen, the birds were now where the water dispenser used to be (we filter our water with a British Berkefeld, the well water has way too many minerals in it), I had some shelves on the wall I decided I didn’t want anymore, I realized the south wing really, really needed a bookcase …
Yeah, it was a big job. I went downstairs and emptied out the bookcase The Reluctant Farmer made me as a Christmas gift a few years ago and brought it upstairs. The books that were on it will now need to be sorted, but it’s time, especially as it held a lot of little kid books. Realized it had never been stained, so found the Light Walnut and gave it a quick coating, then got it in place. Shuffled furniture multiple times to make everything fit. Moved two spinning wheels upstairs. Hung a lovely picture that was at my grandparents’ house and has been in my house, my mom and dad’s place, and my sister’s … and now it’s back in my house. It’s a reproduction of Vermeer’s The Milkmaid, so it seems appropriate that it is here! 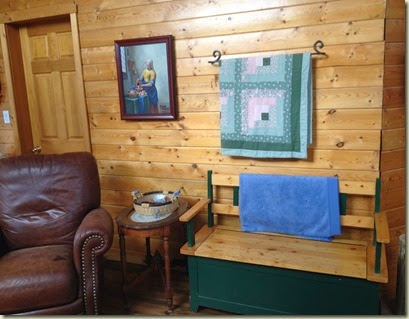 I do very much love that painting. It is signed “A Schneider” but I’ve no idea who he was, or how old it is. It’s older than I am, that’s for sure!
The quilt rail is strategically placed to hide the controls for the air circulation and the thermostat – it actually shuts off the heat whenever we have the fire going, or even when the sun shines on it too much, and then at night it’s way too cold, so it does need to be a little more protected. Plus, what a lovely way to display a quilt! This one was made for me by a friend of my mom’s, I use it a lot.
Other changes that’ll really only make sense if you’ve been to my house include turning the dining table the other way, making more room in the kitchen to work (I actually brought in a small table like a mini-island, I think a proper kitchen cart might be very handy to have there but I’ll test it out like this and see), putting the piano back in the southwest corner (with the bench there – I’m puttering around with playing now that I often have the house to myself, I do need to go downstairs and find the student music books!), and putting the little night table that was in my room when I was small next to the rocking chair that’s over by the bookcase. Oh, and I moved the chalkwork people – the boy and his dog and the girl at the spinning wheel – so they aren’t hidden by the bookcase. And I hung my “Home Safe Home” sign right there on the end of the bookcase so I can see it from the whole room!

Here is a short video of the whole room (you can hear the birds chirping!):