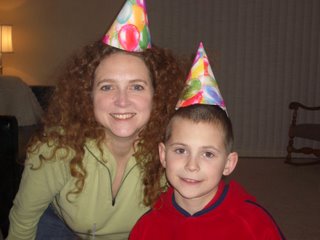 Finally, pictures! This is The Boy on his birthday (and me, The Mom). 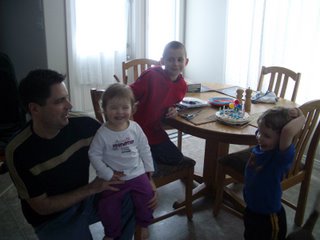 Union Guy and his kids made The Boy a cake ... we had three cakes in the space of two days, that's a lot of partying! The kids even decorated it themselves - there were a lot of sprinkles! 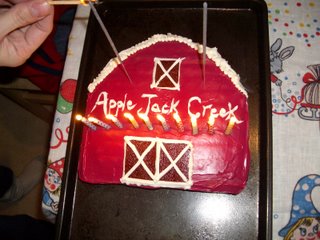 Here is a picture of one of the cakes: Union Guy baked, and I decorated ... I decided on a 'rural theme' to celebrate our first birthday at Apple Jack Creek. 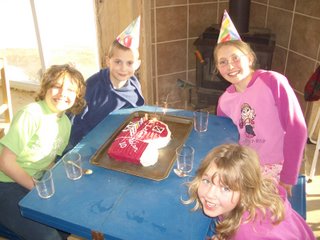 We couldn't have a big birthday party, with our house under construction, but we did invite our Neighbours (The Cousins) to come for dinner. The Boy's new favourite meat is deer meat (which I can't just pick up at the grocery store ... and I've not yet taken up hunting). The neighbours were kind enough to donate some from their freezer, knowing it's his favourite - I have to say, it sure smells good (even as a vegetarian, I could tell!). In addition to the deer, we had ham, mashed potatoes, sweet potatoes, broccoli and cauliflower, raw veggies and salad. It was quite the party! The Cousins were all invited to play piano in a music festival that evening, so they couldn't stay very long. We ate, the kids played, and then the musical ones got changed into their recital clothes (and we had some interesting hair adventures - lots of static electricity and not too many choices in terms of hair products!). They headed off to their adventures, and The Boy played with his presents. After it got dark, Union Guy and The Boy and I lit some firecrackers - there are some fun things you can do much more easily (and legally) in the country. :) 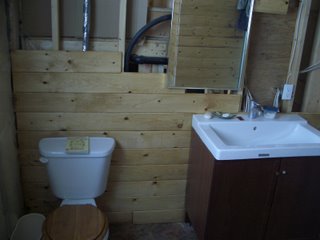 And here we have a picture of the loo, now with walls. Well, partial walls. The upper walls are still made of cardboard (Union Guy finally got tired of the lack of privacy and grabbed a stapler and some packing cardboard to make "walls"...). If you look closely, you'll see that the book on the back of the toilet is the Farmers Almanac. You have arrived in the country when there's a Farmer's Almanac provided for bathroom reading!