Today really felt like a "day at home": I woke up early, but I knew I'd not go back to sleep so I just got out of bed and made myself a pot of coffee in the ancient percolator. I really like the blurping sound of the percolator pots ... it is the sound of the mornings of my childhood, in the days before drip pots and Starbucks. With the coffee on, I decided I was in the mood to try out the oven, so I mixed up a batch of peanut butter cookies, doing the best I could without a cookbook handy. They turned out all right - not as peanut buttery as they usually are, nor quite as sweet, but they tasted pretty good. I had one with my coffee for breakfast.
The Boy was still sleeping, so I got down to business and started on the plate rack. I got that built and mounted to the wall before he surfaced, and then spent the rest of the morning staining the pine plywood sheets for the ceiling while he did his chores. He helped me lift them on and off of the sawhorses in between his own jobs, and his help made working with the 4x8 sheets much easier. I wanted to get those out of the way so that I could begin the task of clearing up and reorganizing the main floor. I did get to that, and the house feels much more like a house than a construction zone. Well, it's still quite definitely a construction zone, but a more house-like one.


I did take a lot of pictures today, so that I could share the progress at Apple Jack Creek. 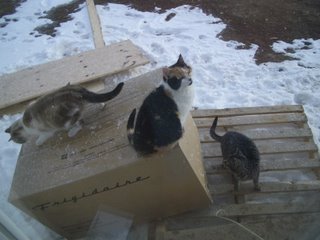 First of all, here are the kittens ... they are getting much bigger but still chase each other around and act adorable. I am hoping they will earn their keep in mice, but perhaps they intend to leverage their entertainment value in lieu of dead mice. We shall see. 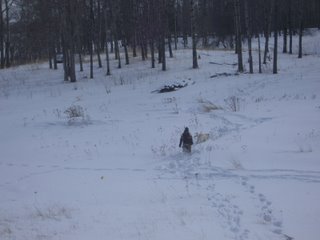 The Boy was out today playing with the neighbour kids (the cousins). They made snow angels and had raced around, climbing and chasing. Here he is with the neighbour's dog, headed up the hill. I told you the snow looked pretty! This is what I see out my living room and kitchen windows ... I think it's lovely. 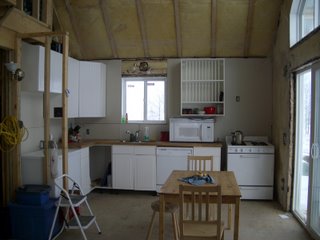 Today's big job was the kitchen. The plate rack is something I've wanted for a long time - I like the look of them, and I like having the plates so easily accessible. It's a bit of a luxury, I suppose - I mean, I could store more 'stuff' in the equivalent wall space of cabinetry, but this was something I really wanted. I've already asked for a new set of dishes for my birthday ... Ikea has a lovely set in blue that would look great on the wall. To make even more space, I lifted the microwave up onto the counter. It won't stay there, of course, it mounts over the stove as it has the exhaust fan built into it. At least now we have a bit more room to move around.
We finally brought the table down from upstairs, and now we can eat in the kitchen! This is a huge step forward: no more carrying plates and food from the kitchen to the loft, and The Boy can have his room to himself! 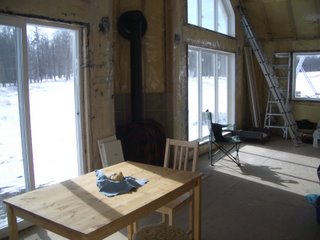 I also cleared up a bunch of the construction mess from the other end of the house (the living room). I moved the saw and sawhorses to the wall outside the bathroom (where the ceiling boards had been sitting), and then shuffled all the remaining bits and pieces of hardware and construction debris into a more efficient layout. If nothing else, I now have a better feel for the space, and what it will feel like to live in it. 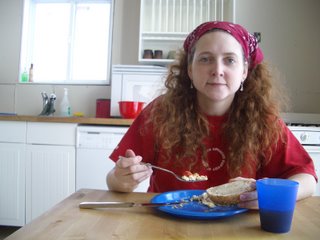 This is me having lunch ... in my own kitchen. I made an omelette made with eggs from the neighbours' chickens, and sat at the kitchen table to enjoy it. Why does stuff taste better when you're at your own table?