A kitchen! We have a kitchen!

It's a long weekend here in Alberta, and Union Guy volunteered to come work on the house with me. Man, did we get lots done! He worked hard on the wiring - we now have light fixtures that turn on when you - gasp - flip a switch! You don't have to hook up the extension cord to the inverter and then plug the trouble light into that and drag it around the house, finding a nail somewhere to hang it on ... you just touch the switch on the wall, and voila! Light! We also have plug ins that you can actually plug stuff into now. Wow. It was hard work, but boy, is it ever nice. 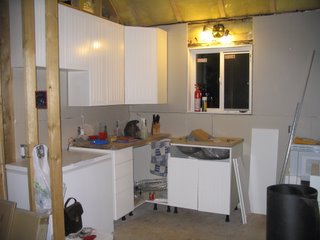 I spent the weekend working on the kitchen. I got the cabinets put together, and mounted to the walls. I find it amazing that the little metal rail you attach to the wall is sufficient to hold those big cabinets up there, but it all feels remarkably sturdy. I still can't get the kitchen sink doors to hang straight, but with some finagling I'm sure they'll behave. What was very cool was actually cooking in the kitchen: we put the countertop on top of the cupboards, and then balanced the electric cookstove on another cabinet, and voila - cooking in the kitchen!
The other exciting thing is that we have a refrigerator: the widget arrived in the mail on Friday, just in time for the weekend. See that chest freezer, at the left of the picture? That's the fridge. The freezer is connected to a second thermostat which cuts power to the compressor when the inside of the freezer is about 8 degrees (or whatever you set the thermostat to). It was very simple to set up - just plug the freezer into the widget, hang the metal thermostat tip inside the freezer, and set the thermostat to the desired temperature. This is the most energy efficient kind of fridge you can get for $400CDN! The cold doesn't fall out when you open the door, and as an added bonus, there's room for a bigger cabinet over the fridge. 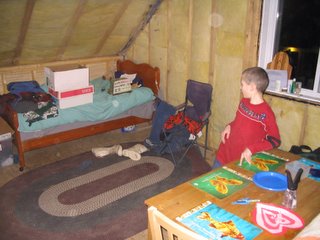 The other thing that happened this weekend is that The Boy got to sleep in his very own room by his very own self for the first time in six months. Well, part of it still serves as the dining area, but my goodness he has a lot of space up there! He has subsequently organized everything and tidied up - this is a picture of his room as a work-in-progress. 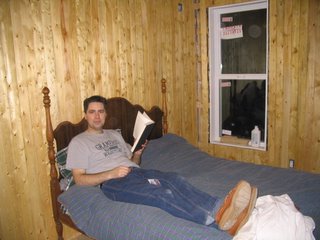 My bedroom is finally far enough along that the remaining work won't be impeded much by having my bed in there - it's on casters and can be shuffled to one side if I need to work. Union Guy carried it downstairs and set it up (and then decided it was time for a break!)

With light switches, power outlets, some kitchen cabinets and a working fridge it is really starting to feel like a house now. We are still washing dishes in the bathroom sink, but Plumber Man is coming this week to install the wood stove and we may have the kitchen sink in the next week or so - that just depends on getting the counter top in place, and there are a few things that need to be done first.

All in all it was a very productive weekend - of course, my truck died this afternoon (fortunately just after reaching the city limits and not out in the country somewhere) ... I think the fuel filter got gunked up when everything froze. Diesel's can get a little particular that way. It's sitting at the garage, I'll talk to the guys tomorrow about repairing it, and in the meantime, Union Guy has a car I can use.

Anyone want to buy a 1998 Olds Intrigue? Not until my truck is fixed, of course ... Union Guy has been trying to sell this car for awhile. Hey, it starts even when it's been sitting in the cold for 4 days! What else could you want?