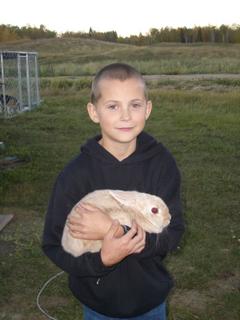 The Boy was promised that he could have a new "outside pet" when we moved to the country. He thought about it, and decided that he'd really like a rabbit. We had plans to join 4H when it started, and then we could do a rabbit-raising project.

When I moved out of the other house, I became a huge fan of Freecycling (www.freecycle.net if you haven't heard of it!): people post offers for things they want to give away and can post requests for things they want, in case someone else has whatever it is and is willing to give it away. It's a great way to keep stuff out of the dump, and make sure it goes where it'll be appreciated. Anyway, one day when surfing the Freecycle listings, I saw an outdoor bunny that was looking for a home. I emailed and we were selected ... but I didn't tell The Boy about it at all. Things got delayed, but with one thing and another eventually it was time to go pick up the bunny. I told The Boy I had a surprise for him, and that I'd be late because I had to go pick it up - he was really pleased to see what the surprise was! She's been christened Cappucino since she's the colour of an Iced Cappucino. She's very friendly, and comes right up to you when you go to her little hutch. The first thing we did was remove the floor of the hutch so she was on the grass and she promptly started munching. She's been burrowing under the hutch a little - we are watching to see if she makes an escape tunnel or just a burrow, but we know that they like to burrow to keep warm and it's a bit chilly out there now, so we are letting her dig and providing her with lots of hay to burrow down into. Or eat, she does that with it too.