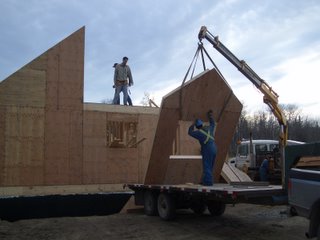 This is how the pieces are lifted. Some of them had to have holes drilled in them so we could put the straps through to lift them. 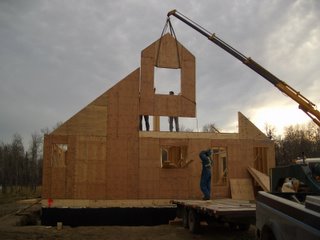 It was tricky to align everything. We had to lift it up, align it just so, and then sort of slide it down, and then hammer it into place. The guy with the hard hat is the son of the picker operator, and he had a test that he should have been studying for ... but he came to work on this job. I promised to pray for him on Tuesday when he wrote his test and I remembered to do so. Hope he did okay. :) 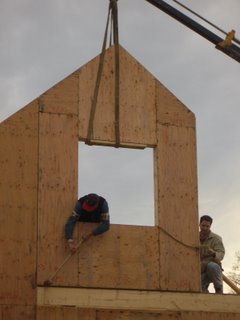 That's Contractor Man with the sledge hammer, or as Dad calls it, the "friendly persuader": he's persuading the pieces to go together. We did a lot of that on Sunday night. The guy on the other side is That Really Nice Guy who is so good to me (and to The Boy). :)
Below you can see the pieces sliding into place, just like they should be. There were only two pieces that had to be trimmed, by about a quarter of an inch, so that everything would go together: this one, and the one below it. 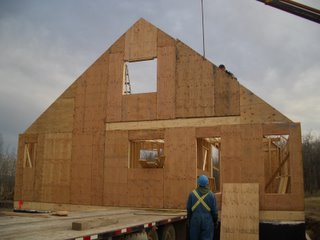 And last but not least, here's the front of the house, with the chimney pillars in place. We spent a lot of time aligning these and making sure they were level ... and then when we put the ridge pole in place everything went "CREAK!" and "KACHUNK" and things kinda shifted. But hey, it started off level! 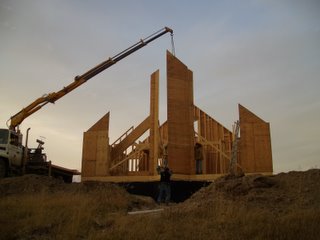