Yep, we now have a solid subfloor laid, including a hatchway to the crawlspace. It sure is tiny down there .. the plumber is going to have fun putting the underfloor heating in with so little headroom! 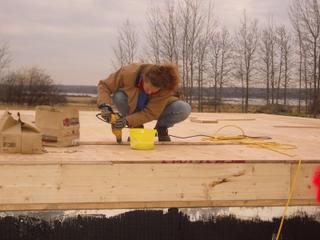 I spent about 3 hours on Saturday putting in the screws to hold the flooring onto the joists - I'm a little stiff today but hey, that is 3 hours of labour that doesn't cost me money ... just Advil! The Boy took this action shot of me up there working. Sure is nice to work with good tools - Contractor Man left me his Dewalt drill. Nice and light, variable speed, super powerful. Plugged it into the generator (which is noisy but effective) and off I went. It took a bit of practice to get the feel for it, and to find the best strategy (get out four screws, put three in my mouth, sit in the centre of the board, put the four screws in, lined up with the nails already in place ... scoot backwards, and do it all again ... repeat ... repeat ... repeat ...)...

Oh, our other fascinating bit of news is that we discovered that Neighbour (the farmer that I bought the land from) is actually my second cousin. We had no idea about any of this: my parents have gone to BC for a year, and were visiting with my mother's brother and his family, just talking about our life on the acreage. Mom happened to mention Neighbour's name and then my uncle started asking questions ... turns out Neighbour is his wife's nephew. So, my neighbour's father is (well, was, he has passed on) my mother's brother's wife's brother. We share an aunt, and a set of cousins. Too cool. I told Neighbour that now he's really stuck with us: not only are we neighbours, we're family! 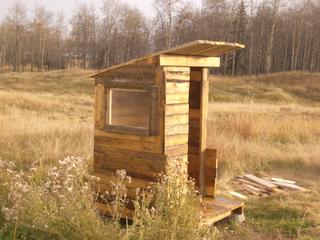 One last thing - we got the bus shelter almost finished ... all that's left now is to shingle the roof, and then (if I get creative) add a door. It's protected with linseed oil and turpentine, and Dad put in the window before he left for BC. The Boy says it's nice to be out of the wind and rain in there, so ... yippee!