Very early yesterday morning I woke up in need of a glass of water, and I heard rain on the windows.

“Great,” I thought, “that’ll help wash away some more of the snow, and since we’re down to bare ground in a lot of places, it will go quickly.”

I went back to sleep, and when I woke up the rain had stopped. Oh well, sunshine melts snow too.

Then I looked out the window. 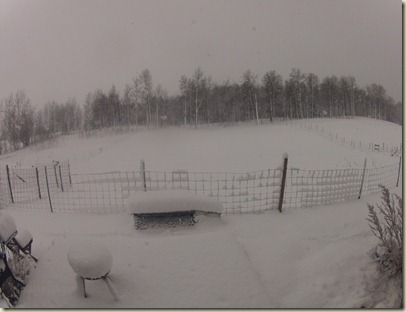 All that arrived in just a few hours. Whoa. I was very glad not to have to go anywhere in the car, not with that heavy wet stuff all over the roads.

I flipped the switch to make sure the batteries were charging from the grid power and got the dishwasher going: with all that snow a power outage was probably coming and although there is enough solar power to keep us quite comfortable for a good long while, it’s best to be topped up before a storm if you can. We did have power outages off and on all day, though they were all short lived.

The next thing I thought was “some sheep is going to decide that today is the perfect day to have a lamb”. Storms and bad weather don’t bother the Icelandics much, so it could happen. Sure enough, The Boy came to the door and said “can you come deal with this lamb please?” I was just getting into my coveralls when he appeared at the door again, this time holding a tiny little lamb. “Here,” he said, “deal with this one first. It got out of the  pen and couldn’t figure out how to get back in, so it’s kind of cold.” Sure enough, the little lamb was shivering, and when I stuck my finger in his mouth it was cool, but not as chilled as some we’ve had to work with in the past. He was trying hard to suck my finger so I knew he’d be okay once he warmed up, so I put him on a wool rug (which is actually the felted coat of one of the Icelandics, who didn’t get shorn in time) in front of the fireplace and headed outside to check on his twin. The other lamb was up and nursing and doing fine, so we put him in the barn with his mama and I was able to get a bit of milk in a jar for the chilly lamb. The lamb greedily drank the colostrum from the oral syringe, though he was still shivering. I put a heated barley bag over his chest and belly and he went to sleep, peaceful as anything, with the cat sniffing at the milk droplets on his chin.

Once the lamb was good and warm, I helped him to his feet. He immediately started butting at my leg, a sure sign that he was ready to see his mama again, so I got into my outside gear once more and took him out to the barn. The ewe wanted nothing to do with him: she sniffed him and seemed unimpressed, and when he tried to nurse she butted him away. Then I realized that there was a second ewe in the barnyard bellowing that “where is my baby?” sound – aha! We didn’t have twins, we had two ewes who had delivered at the same time! Sure enough, once that mama caught sight of her baby she was ecstatic, talking to him and licking him and quite happy to let him nurse. She needed a bit of a trim around the lower half so that the poor lamb could find his way to what he was after, but that mama was really calm, and just stood there chewing her cud while I did a quick haircut.

Today, all is well outside, we have two happy lambs with two happy mamas.

This mama is a Southdown/Columbia cross, and her lamb is clearly an Icelandic cross – the curly fleece and short tail are the giveaway there: 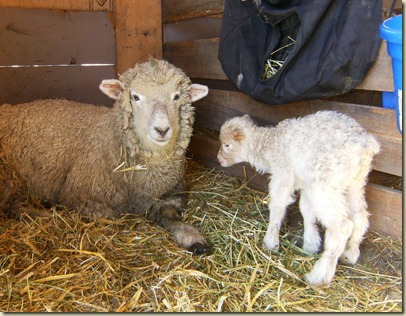 And the other mama is a similar sheep – a Columbia/Southdown cross, and her lamb is very clearly a Southdown baby … one of Jack’s last offspring. 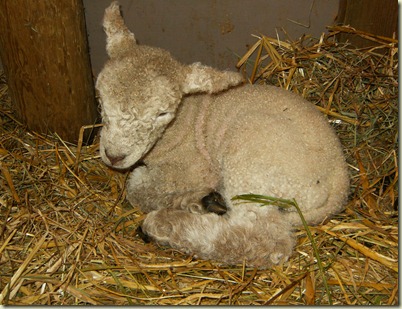 Look at those big feet and that adorable face.