I spent the last three days at the local Farm and Ranch show, participating in a Shearing to Shawl event hosted by the alpaca spring show.

We were a bit surprised to find out that we were the headline event!

Thursday around noon, two alpacas were shorn and their fibre put out on a sorting table for us … and then we were off to do our thing. With the assistance of several spinners and knitters who showed up to help, we got that fibre combed (some of it – it was so clean that spinning directly from the locks was not a problem), spun, and woven and knitted into two finished objects: a rectangular stole and a woven scarf. 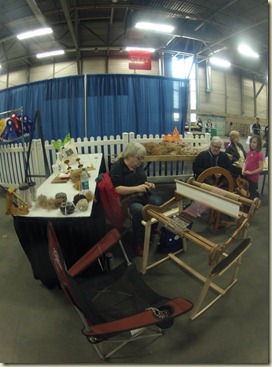 I didn’t get much in the way of pictures, but I should have a few emailed to me in the next few days and I’ll post them when they arrive.

The stole was made by using Judy’s Magic Cast On to cast on … umm … a lot of stitches. I didn’t count. Lots. Then we worked in the round, increasing every corner for the first six rounds or so, then every other round. It’s a great strategy when you aren’t sure how much yarn (or time) you will have but need to create a rectangular object of some width or other. One of our number is accomplished at crochet, and worked an interesting crochet cast off / loopy lacy border that gave extra definition and size to the stole at the last minute. Here it is, being modeled at the judging table: 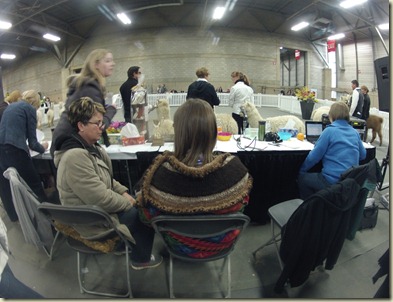 It was fun, if exhausting. We explained the magic of spinning and weaving and knitting to groups of bystanders, talked to alpaca owners about what spinners want in the fibre, and got to pet and hug a lot of adorable creatures.

In fact, the second alpaca they sheared for us, a female named Eos, is the same one who came up to me while I was spinning at the show in the fall and kissed me on the cheek! Her people (the nice folks at Northern Mystery Alpacas) brought her specifically to be one of the animals donating fibre to us, because they know that the beautiful and friendly Eos loves spinners. Athena, also from Northern Mystery, provided us with a lovely brown coat and the two colours blended beautifully together. Not incidentally, this was the cleanest, most dirt and VM-free alpaca fibre I’ve ever handled straight off the animal. Combine that with the absolutely amazing shearing job (the lady who did the shearing will have done 10,000 animals by the end of this shearing season, so she is good)  meant that we had almost no second cuts to deal with (I think I ran into about three little tufts the entire time and they came out easily). It was about as good a spinning experience as you can have, particularly when you don’t have time to wash or fully prep the fibre before you get going on your project.

Later, I’m going to write a big post about how much I love wool combs for fibre prep, but for now, I am going to relax with my cup of coffee and my knitting beside the fire … because when I woke up this morning, all the grass that I was so happy to see yesterday was covered in a foot of fresh, sticky snow.